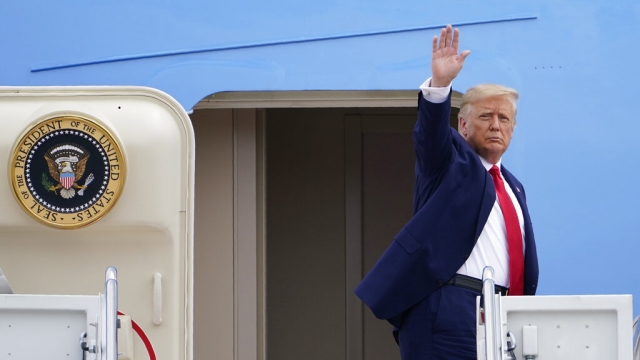 In his new book, New York Times reporter Michael Schmidt, citing unnamed sources, says Vice President Mike Pence was put on standby to "take over the powers of the presidency temporarily if Trump had to undergo a procedure that would have required him to be anesthetized."

"Part of this job is you're always on standby if you're vice president of the United States, but the American people can be confident that this president is in remarkable good health," Vice President Pence said.

President Trump tweeting on Tuesday that Vice President Pence was "never put on standby and there were no mini-strokes," saying the November 16 hospital visit was "in order to complete my yearly physical."

Then-White House Press Secretary Stephanie Grisham telling reporters at the time "Anticipating a very busy 2020, the president is taking advantage of a free weekend here in Washington, D.C., to begin portions of his routine annual physical exam at Walter Reed.”

The former White House Physician Ronny Jackson was quick to come to the president’s defense.

"This is the most ridiculous thing I've ever heard. Now, I wont get into the president's health. I'm no longer his physician. But I will comment and tell you that I was consulted regarding this trip weeks in advance," Jackson said in a video posted on Twitter.

Jackson has previously been accused of covering for the president… distorting his health on his annual assessments… and saying with a better diet, the president could’ve lived to be 200.

White House pool reports from that day indicate the visit came as a surprise to reporters, and journalists were told not to report on the president's movements until after he arrived at Walter Reed. The visit lasted just under two and a half hours.

Shortly after leaving the hospital, Grisham told White House reporters the president visited with medical staff at Walter Reed and met with the family of a special forces soldier injured in Afghanistan. Such visits are typically pre-scheduled.

It's not the first time reports of the president's health have raised eyebrows. Earlier this year, the president said he was taking daily doses of the controversial drug Hydroxychloriquine as a precaution against the coronavirus.

The new questions come as the president faces off against former vice president Joe Biden in the 2020 election. They are two of the oldest presidential candidates in history — Biden is 77 and President Trump is 74.

"My worry is, we have an election between Trump and Biden, and Trump somehow in the middle of this becomes incapacitated, but covers it up, doesn't let us know that the person we are going to vote for may become increasingly disabled during a second term," he said.