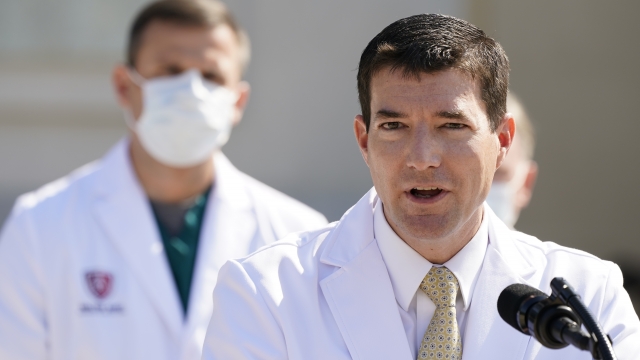 Speaking on the steps of the military hospital treating the president, Dr. Sean Conley said the president's blood oxygen dipped below 94% on Friday and then again at another point on Saturday. However President Trump "has continued to improve" since then.

The president's oxygen reading has jumped back to 98 percent, which is in the normal range of between 95 and 100.

Conley admitted to dodging questions about the president's oxygen levels when he talked to the press on Saturday because, he said, he wanted to reflect the "upbeat attitude" of the president and his medical team.

"I was trying to reflect the upbeat attitude of the team, that the president, that his course of illness has had ... And in doing so, came off like we’re trying to hide something, which wasn’t necessarily true. The fact of the matter is that he’s doing really well."

Sunday's press conference follows a day of conflicting reports on President Trump's health ˆ— with  Conley's "optimistic" outlook on Saturday followed by White House Chief of Staff Mark Meadows telling reporters the 74-year-old president went through a very "concerning period" Friday and that he wasn't "out of the woods" yet.

The president's medical team said he could be discharged as soon as Monday.