President Trump Is Missing Important Context With His NAFTA Claims 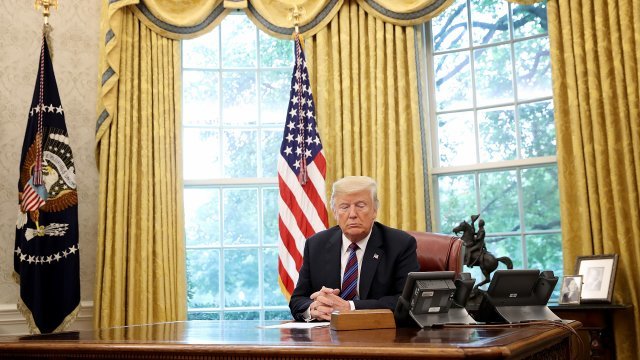 After a rally in Las Vegas earlier this month, President Donald Trump gave an interview to Sean Hannity. He started talking about NAFTA, and gave us some claims to fact check.

Okay, so there are two claims we'll look at here: NAFTA cost thousands of plants, and NAFTA cost millions of jobs.

First, the plants. This one's a little tricky to get a really solid read on. There were actually tens of thousands fewer manufacturing plants in 2014 than in 1994, when NAFTA was enacted. But it's likely not all of those plants can blame their closure to NAFTA. Technology and automation plays a huge role there. The president is probably fairly accurate in saying "thousands" of plants closed due to NAFTA.

Then, there's the claim about the jobs. Even if the jobs at those thousands of plants disappeared, economists don't count that as a loss if more jobs appeared elsewhere.

Estimates of how many jobs NAFTA actually cost overall vary greatly, but none put the number in the millions. Yes, millions of manufacturing jobs disappeared following NAFTA's implementation. But not all of those can be blamed on the trade agreement, and many jobs were created elsewhere. The largest estimate of net job loss because of NAFTA is 851,700.

That said, former President Bill Clinton normalized trade relations with China in the last year of his presidency. Between 2001 and 2013, the U.S. lost 3.2 million jobs to trade with China, according to an estimate from the Economic Policy Institute.

But to blame NAFTA for millions of net jobs lost is inaccurate.