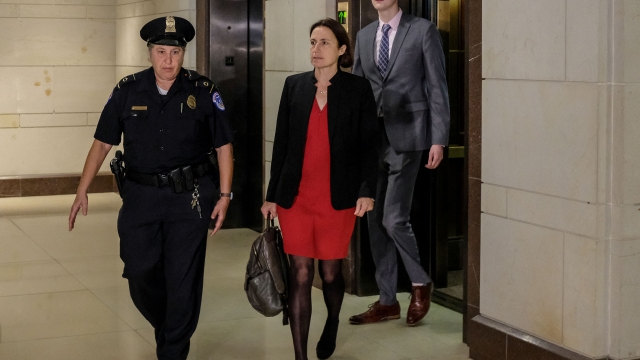 In a tweet, her lawyer said she agreed to answer questions after she received a subpoena from Congress.

Rep. Jim Jordan said Hill was subpoenaed even though she seemed willing to testify voluntarily. The House Intelligence Committee reportedly issued the subpoena in case the White House tried to prevent her testimony, but there hasn't been any evidence that it did so.

Multiple outlets report that Hill praised former Ambassador to Ukraine Marie Yovanovitch on Monday. Yovanovitch reportedly told House investigators during her own testimony that President Trump pressured the State Department to remove her based on "false claims."

House Democrats are looking into whether President Trump withheld military aid to Ukraine in order to pressure the country to investigate Joe Biden and his son. President Trump has repeatedly said there was "no quid pro quo" and that his conversation with Ukraine's president was "perfect."

But Republicans aren't happy with how House Intelligence Committee Chairman Adam Schiff is leading the investigation. They've demanded that interview transcripts be released to Congress. And some have accused Democrats of only leaking information that fits their narrative.

Republican Rep. Matt Gaetz, who is not part of the three committees conducting the impeachment investigation, reportedly tried to sit in on Hill's deposition and was kicked out.

"If Adam Schiff and House Democrats were so proud of their work, they would be willing to show it. Consistently, Republicans have come out on each and every one of these depositions and we've sought for a release of the transcript for the American people to see more. So I guess the question is, why is Adam Schiff trying to run a kangaroo court? Why is he continuing to limit access to evidence, limit access even from members of Congress? So I'm deeply disappointed that as a member of the House Judiciary Committee, on behalf of my constituents, I'm unable to participate and listen to the questions and answers."

Hill was the first to testify this week in the impeachment inquiry. Congress is scheduled to hear from Gordon Sondland, the U.S. ambassador to the EU, on Thursday. He's expected to talk about text messages related to President Trump's July 25 phone call with Ukraine's president and the delay of aid to Ukraine.