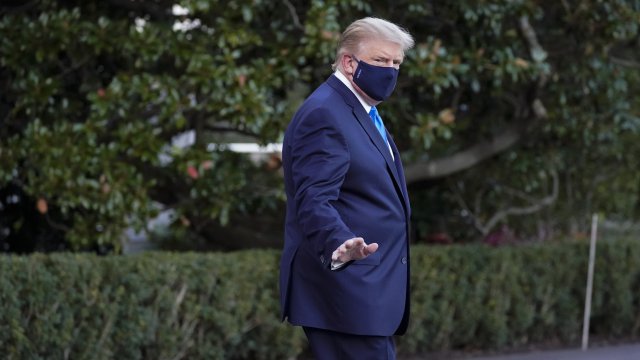 A situation developing by the hour.

"As all you know the President and First Lady tested positive for COVID-19. They remain in good spirits. The President does have mild symptoms," said White House chief of staff Mark Meadows.

The Trump campaign said Friday the president will be off the campaign trail… either postponing or keeping events virtual as he quarantines and recovers. Staffers say they are looking into ways for the president to stay involved.

"You'll be seeing and hearing from the president as he moves forward with his working schedule," said White House press secretary Kayleigh McEnany. "We're exploring a number of different ways to do that, but he wants to talk to the American people."

This comes less than two weeks before the president is scheduled to debate Democratic nominee Joe Biden in Miami.  White House Press Secretary Kayleigh McEnany wouldn't say whether the president would debate the former VP in person during the recommended two week quarantine period.

Biden-- and his wife Jill Biden-- both tested negative for the virus Friday ahead of travel to Grand Rapids, Michigan.

"Sending my prayers for the health and safety of the First Lady and President," said Joe Biden.

The campaign kept plans to hold an event there Friday evening after receiving results. During the event, the former V-P said he was praying for the First Lady and the President. He also called for a national mask mandate and for rapid testing to be widely available.

"This is not a matter of politics, it's a bracing reminder to all of us that we have to take this virus seriously. It's not going away automatically. We have to do our part to be responsible," Biden said.

A source told Newsy Biden campaign staffers on the ground in swing states will continue operations as normal. The campaign is planning to expand in-person campaigning-- door knocking in swing states like Pennsylvania, New Hampshire, Nevada and Michigan.

The nominees aren't the only ones on the trail. After testing negative for the virus, both Senator Kamala Harris and her husband Doug traveled to Las Vegas for a campaign event. Vice President Pence and Karen Pence also tested negative Friday morning. Harris and Pence are expected to debate in Salt Lake City Wednesday.