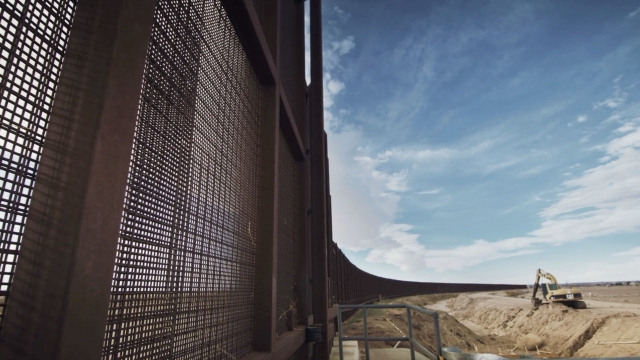 SMS
A Southern Border Wall Has Been President Trump's Priority Since Day 1
By Katie Cammarata
By Katie Cammarata
January 30, 2020
The president has been fighting for a wall along the U.S.-Mexico border since his first week in office.
SHOW TRANSCRIPT

President Donald Trump has pushed for the creation of a wall along the U.S.-Mexico border since the day he announced his candidacy.

"I will build a great, great wall on our southern border, and I will have Mexico pay for that wall. Mark my words," the president said.

In his first week in office, President Trump signed an executive order directing the Department of Homeland Security to "take all appropriate steps to immediately plan, design, and construct a physical wall along the southern border." The department looked into it, and according to a leaked internal report, figured the total cost of building a wall to be somewhere around $21 billion.

The Trump administration moved forward with the plan and began having prototypes of the wall built near San Diego.

In April 2017, a congressman and an environmental group filed the first lawsuit against the Trump administration over the wall. It called for the government to complete a comprehensive environmental impact survey before starting construction. The border wall project was the subject of a number of lawsuits.

Fast forward to August of that year. Homeland Security issued a waiver for the San Diego area, allowing the department to bypass environmental laws and other regulations to build barriers and roads near the border. For example, the waiver didn't require the department to conduct an environmental impact study before construction.

Now that plans for the wall were moving forward, the debate moved to how to pay for it. President Trump had to get approval from Congress for any government money he used for construction of the border wall. He pushed for funding multiple times during spending bill discussions. His fight for the wall even led to the longest partial government shutdown in U.S. history at the beginning of 2019.

In February, the president declared a national emergency to build the border wall. That declaration gave President Trump access to certain emergency funds without congressional approval. There were multiple lawsuits, and Congress unsuccessfully tried to block the move.

Opponents argue President Trump illegally transferred the money and the wall could cause environmental harm.

The White House said it could legally divert some government money under a provision that gives the OK if the national emergency "requires use of the armed forces" and if the money is going toward a project that's "necessary to support [the] use of armed forces."

The wall debate has gone back and forth in the courts. Federal judges have both blocked and approved the move. In July 2019, the Supreme Court handed President Trump a win and said his administration could use some Defense Department money for border wall projects in Arizona, New Mexico and California. But before the administration could use the money on the wall, an appeals court had to determine if the White House had the authority to divert it in the first place.

As of January, the 9th U.S. Circuit Court of Appeals has yet to release its decision.