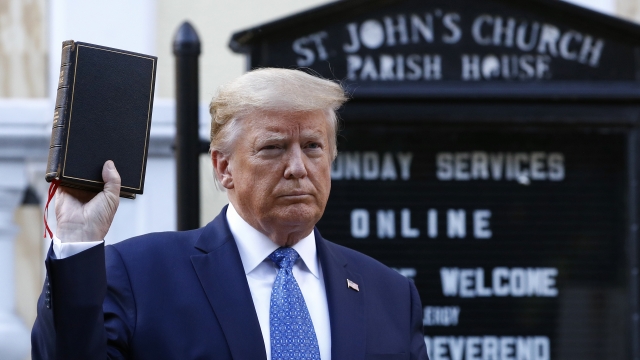 SMS
Faith Leaders React To President's Bible Gesture Amid Protests
By Amber Strong
By Amber Strong
June 2, 2020
Some called the president's trip to St. John's Espiscopal Church a show of strength. Others say it was a photo-op.
SHOW TRANSCRIPT

Hours later, he signed an executive order on religious freedom.

It’s a topic the president has made a focal point of his administration and one that is a top concern for some of his strongest supporters.

That was clear Monday, when the U.S. Secret Service and D.C. police used tear gas to clear the streets in front of the White House just before President Trump made his way to St. John’s Episcopal Church.

The church had been set on fire during protests the day before.

Holding a Bible, the president declared the country was coming back, drawing criticism from Christians and even some members of the GOP.

“It was an abuse of the spiritual tools and symbols of our tradition and of our sacred space,” Rev. Mariann Budde, bishop of the Episcopal Diocese of Washington, told CNN.

“If your question is, 'Should you use tear gas to clear a path so the president can go have a photo-op?' The answer is no,” Sen. Tim Scott told Politico.

Dr. Russell Morore, president of the Ethics & Religious Liberty Commission of the Southern Baptist Convention, told Newsy: “For me, the Bible is the word of the living God and should be treated with reverence and awe.

“More important than politics and optics is that all of us should be listening to what the Bible says, about the preciousness of human life, about the sins of racism and injustice, about the need for safety and calm.”

But for some Christians and evangelical pastors who support President Trump, gestures like that are meaningful.

“Robert Jeffress, we know him very well, and Tony Perkins, both pretty staunch supporters of the president who are sticking with him on all of this. I mean, you know, Robert Jeffress says he was glad that Donald Trump went and held a Bible In front of the church, and then went on to say that the Bible represents everything that's wrong with racism and with lawlessness,” said David Brody, chief political analyst of the The Christian Broadcasting Network.

“I think the reason that they are distrustful, they don't trust him, is because of the rhetoric which they hear from the White House,” said Sammie Berry, minister of the Dallas West Church of Christ.

Sammie Berry was the minister of Botham Jean, the Dallas youth minister who was killed by police officer Amber Guyger.

Berry, who helped lead faith leaders in efforts to reform the Dallas Police Department after that shooting, says he was surprised to hear President Trump speak in support of George Floyd.

But he says the president’s words must be followed by action.

“I think the U.S., one of the things that they can do anytime there is a killing where a White officer kills a Black or brown person, in every case, the Justice Department needs to look into it.”

On Tuesday, a group of black pastors visited St. John’s church with a message for President Trump that “God is on always on the side of the oppressed.”

“Not talking about George Floyd and racism and civil rights in the church, all right there holding up the Bible, it was just a photo-op. He didn't say anything of significance, of import. And so I think that was a missed opportunity. And he could have really helped himself there with Black Christians,” said Brody.