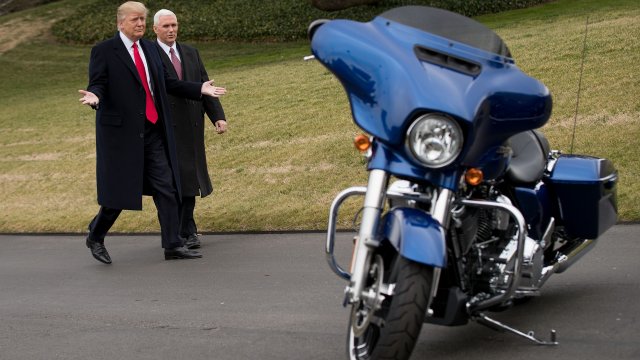 President Donald Trump appeared to backpedal on his criticism of motorcycle manufacturer Harley-Davidson after the company posted weak sales.

Harley-Davidson announced Tuesday its profits dropped almost 27 percent in the first quarter, and partially blamed tariffs from EU and China for the decline. President Trump weighed in on the matter, tweeting the U.S. "will reciprocate" against the EU for the tariffs.

EU tariffs on Harley cycles jumped from 6 percent to 31 percent last year in response to the Trump administration putting tariffs on steel and aluminum imports. Harley-Davidson says the move will cost it at least $100 million in 2019.

President Trump's defense of the company is a big change from last year, when Harley said it would move production of its European-model motorcycles overseas to get around the new fees. President Trump expressed his disapproval of the decision, threatening to tax the company "like never before!"