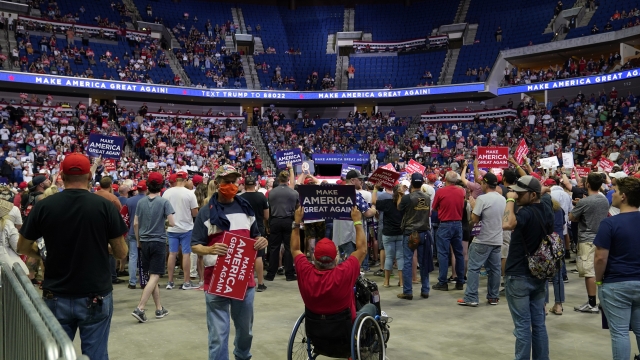 "We begin our campaign. I just want to thank all of you. You are warriors," President Trump said.

The Trump campaign said a million people requested tickets ahead of the rally. But inside the BOK Center in Tulsa, which holds 19,000, there were empty seats. President Trump and Vice President Mike Pence were originally scheduled to make a statement to an overflow crowd outside. But the Trump campaign canceled those speeches last minute, blaming lower than expected crowds on protesters and the media for attempting to "frighten off the President's supporters."

"And our people are not nearly as violent, but if they ever were, it would be a terrible, terrible say for the other side," said President Trump.

Temperature checks were in place for attendees as well as campaign staff. In fact, six Trump campaign staffers who were helping organize the event tested positive for COVID-19. During the rally, the crowd wasn't social distancing, but a few people were wearing masks. The president downplayed recent increases in coronavirus cases, tying the spike to more testing.

His nearly one hour and 45 minute speech covered his usual campaign talking points, while largely sidestepping the racial injustice issues that prompted protests around the country. The president didn't mention George Floyd or the decision to delay the rally because of Juneteenth, but he did express his appreciation for law enforcement.

"As president I will always support the incredible men and woman of law enforcement," the president said.

In the coming weeks, eyes will be on the Tulsa region for any spikes in COVID-19 cases. Rally attendees had to agree not to hold the Trump campaign liable if they get sick.