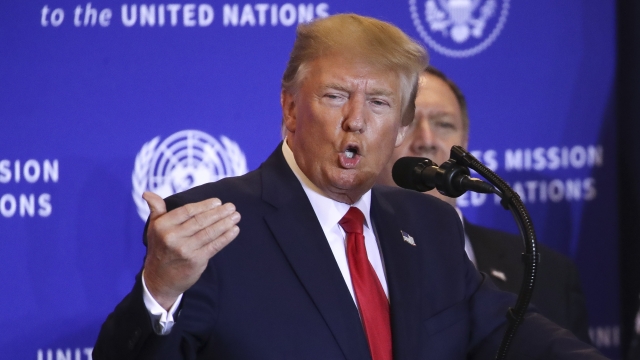 The whistleblower complaint involving President Donald Trump is now in the hands of Congress. The Office of the Director of National Intelligence released the complaint on Wednesday.

President Trump held a press conference shortly after its release and just a day after Speaker Nancy Pelosi announced the House will open a formal impeachment inquiry.

"But I've spoken with [House majority] leader Kevin McCarthy and the Republicans, many of them, and we were going to do this anyway, but I've informed them, all of the House members, that I fully support transparency on the so-called whistleblower information," President Trump said. "... But also insist on transparency from Joe Biden and his son, Hunter, on the millions of dollars that have been quickly and easily taken out of Ukraine and China."

The president also alleged Democrats had gone to Ukraine and "attempted to force the new president to do things that they wanted under the form of political threat" and "demand[ed] transparency."

"It was normal," Ukrainian President Vlodymyr Zelensky said. "We spoke about many things. So I think, and you read, that nobody pushed me."

The whistleblower complaint reportedly involves Ukraine and a promise made to a foreign leader.

Moving forward, the House approved a nonbinding resolution about the complaint Wednesday. The resolution would rebuke the Trump administration's decision not to immediately release the complaint to Congress as required by law. The resolution gives a look into why Pelosi announced a formal impeachment inquiry. Prior to the House's vote, she reiterated her support for the resolution.

"This vote today is about more than just any one president. This resolution is about the preservation of our American system of government," Pelosi said. "Once we pass this resolution, the [director of national intelligence] will be faced with a choice to honor his responsibility to help preserve our republic or to break the law."

Acting Director of National Intelligence Joseph Maguire is schedule to testify about the whistleblower complaint before the House Intelligence Committee on Thursday.