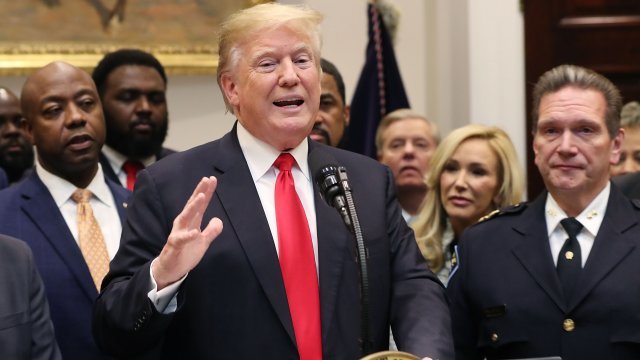 By Alexandra Miller
December 13, 2018
Senate Majority Leader Mitch McConnell will call a vote on the First Step Act, and that has a lot to do with the White House.
SHOW TRANSCRIPT

The White House is leading on an unlikely issue: criminal justice reform. This, after the president said the death penalty should be considered for drug offenders earlier this year.

Ja'ron Smith is President Trump's go-to person on criminal justice. He says the president was impacted by personal stories like Alice Johnson's, who Kim Kardashian fought to free after Johnson was incarcerated for life for a nonviolent drug-related crime.

"Not everyone who's locked up are individuals who don't deserve a second chance. This is about second chances. Some people in the criminal justice system just need that opportunity," Smith said.

The White House is championing a criminal justice reform bill that would, among other things, implement sentencing reforms, create programs to help inmates thrive on the outside and grant early release for completion of those programs. The bill would give judges more discretion on mandatory minimum sentences.

"You can't take a one-size-fits-all approach to criminal justice reform because it has a negative impact on families," Smith explained. "Specifically, millennial families."

The president has only recently vocalized support, but his son-in-law Jared Kushner has been working on the legislation for months.The bill aims to reduce recidivism rates, but is only focused on the federal level. Only 181,000 of the more than 2.1 million people in prisons and jails are incarcerated on the federal level. This means only 8 percent of inmates will be impacted by the bill's passage. Smith says the administration hopes states take notice so the rest can be impacted.

Though this bill has broad bipartisan support, there are a handful of Republicans, like Sen. Tom Cotton, and smaller justice organizations that aren't on board. Some on the left say the bill doesn't go far enough. Some on the right worry this bill isn't good for the Republicans' "tough on crime" image.

This legislation isn't new to Washington. An extremely similar version was created by Sens. Chuck Grassley and Dick Durbin during the Obama administration, but Majority Leader Mitch McConnell would not bring it up for a vote. Now McConnell says he will, and that's largely because of pressure from the White House. Smith says the president will follow this through until the bill is sitting on his desk to sign.