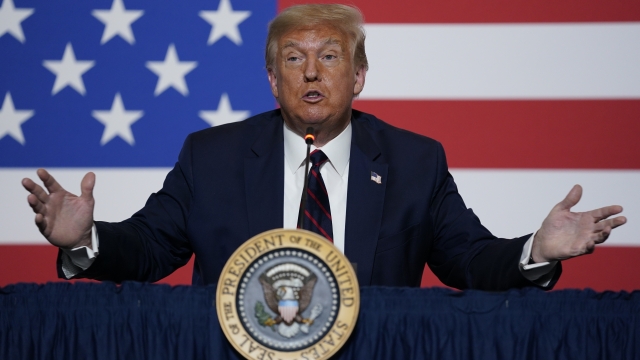 Members of both parties on Thursday pushed back on President Donald Trump's suggestion of delaying the November election over concerns about mail-in voting.

"I understand the president's concern about mail-in voting, which is different than absentee voting, but never in the history of the federal elections have we ever not held an election, and we should go forward with our election," Republican House Minority Leader Kevin McCarthy said.

The president floated the idea of delaying the Nov. 3 election in a tweet, saying an increase in mail-in voting will make 2020 "the most INACCURATE & FRAUDULENT Election in history."

The post comes as President Trump faces a significant deficit in the polls and after a new report that shows the U.S. economy had its worst quarter on record. It's the latest in a series of unfounded attacks on mail-in voting from President Trump. During a funeral service honoring congressman John Lewis, former President Barack Obama blasted any effort to restrict access to the ballot box.

"Even as we sit here, there are those in power who are doing their hardest to discourage people from voting by closing polling locations and targeting minorities and students with restrictive ID laws and attacking our voting rights with surgical precision," Obama said. "Even undermining the Postal Service in the run up to an election that's going to be dependent on mail-in-ballots so people don't get sick."

A new survey from Newsy and Ipsos found ensuring fair elections is top of mind for voters heading into November: 54% of those surveyed expressed concern about mail-in ballot fraud, including 74% of Republicans.

Some Democrats have also noted that the president may not accept the results of the election if Joe Biden wins the White House — something he didn't directly answer during a Fox News interview.

"Can you give a direct answer: You will accept the election?" said Fox News host Chris Wallace.

Attorney General Bill Barr was asked about this during congressional testimony earlier in the week.

"If the results are clear, I would leave office," Barr said.

Twenty-three percent of respondents said they would support the president staying in office if he lost reelection and refused to accept the results.

A president does not have the unilateral authority to delay an election and any change must be made through Congress. After a vote by the Electoral College and certification of election results, the 20th Amendment of the Constitution specifically states that a president and vice president must begin their term at noon on Jan. 20 the year following the general election.