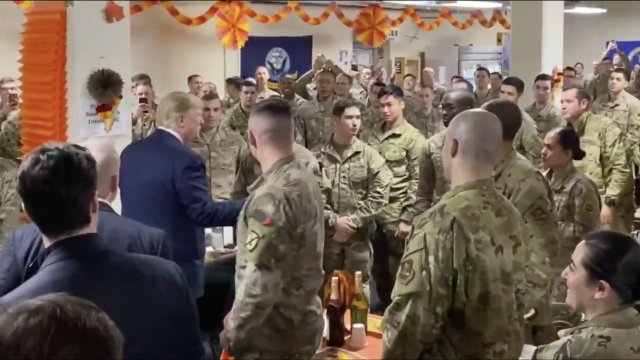 President Donald Trump made a surprise visit to Afghanistan on Thanksgiving Day.

The president spent a couple hours at Bagram Air Field, the largest U.S. base in the country. He served dinner to the troops, posed for some photos and sat to talk with members of the military.

While on the ground, President Trump also had a bilateral meeting with Afghan President Ashraf Ghani. In that meeting, the president said negotiations with the Taliban have resumed and he also said he wants to reduce the number of U.S. troops in Afghanistan to 8,600. We don't know the exact number of troops there right now, but military officials say it's less than 14,000.

For security reasons, it's not unusual for U.S. presidential trips to the Middle East to be kept under wraps. President Trump previously took a surprise trip to Iraq during Christmas time last year.