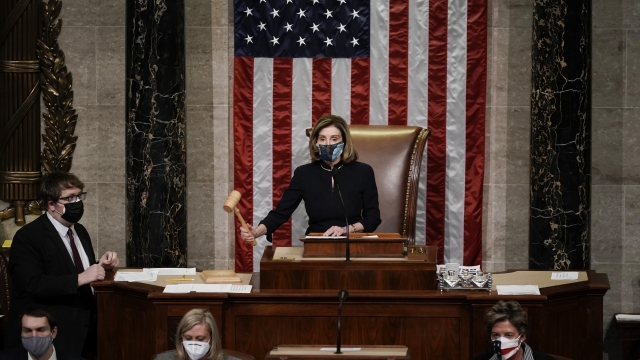 SMS
President Trump Impeached For A Second Time
By Newsy Staff
By Newsy Staff
January 14, 2021
The House voted 232 to 197 to impeach the president, charging him with incitement of insurrection following the deadly Capitol riot last Wednesday.
SHOW TRANSCRIPT

"I want to be very clear, I unequivocally condemn the violence that we saw last week. Violence and vandalism have absolutely no place in our country and no place in our movement," said President Trump. "Making America Great Again has always been about defending the rule of law, supporting the men and women of law enforcement and upholding our nation’s most sacred traditions and values."

In a video, President Trump condemned the riot at the Capitol last week, but didn't take any responsibility for it. And he did not address the House's decision to impeach him for a second time.

The move to impeach the president marks an unprecedented course of action. Lawmakers have voted to impeach a U.S. president just four times. Two of those times have been to impeach President Trump.

The House voted 232 to 197 to impeach the president, charging him with incitement of insurrection following the deadly Capitol riot last Wednesday.

And it wasn't just Democrats who voted yes on the charge. Ten Republican House members voted to impeach the president, including Congresswoman Liz Cheney. That's important because she's the third-ranking House GOP Leader. The split makes it the most bipartisan impeachment in modern times.