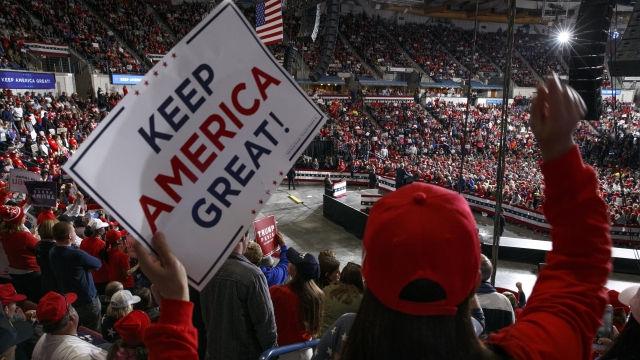 SMS
Campaign 2020 Remains Virtual — For Now
By Nathaniel Reed
By Nathaniel Reed
May 29, 2020
As lockdowns are lifted, there are few concrete details and many hypotheticals on the future of in-person campaigning on the 2020 trail.
SHOW TRANSCRIPT

As coronavirus lockdowns are lifted across the country, President Trump is itching to get out on the trail, “I hope we can do rallies,” he said in his daily briefing on April 17. "For me it's a tremendous way of getting the word out."

The president's apparent goal: returning to the signature campaign rallies that have become hallmarks of his candidacy and his time in office.

"I can't imagine a rally where you have every fourth seat full," Pres. Trump told business leaders in a White House roundtable on April 29th.

"I don't think anything compares to actual live, in-person rallies for either side," said Ron Bonjean, a former spokesman for congressional republicans, who has also worked for the Trump White House and presidential transition team. "It is a measure of enthusiasm that we, as Americans, have grown accustomed to."

"I think you are going to see a number of rallies, and a large number of Americans are going to attend those as the country starts opening up and the closer we get to the election," added Bonjean, who is also a partner at public affairs firm ROKK Solutions in Washington.

But a quick return to campaign events looks unlikely.

"[Coronavirus] spreads very easily, by droplet, which is why [wearing a mask] is so important," Neysa Ernst, the nurse manager for Johns Hopkins' biocontainment unit told Newsy.

Ernst said she thinks big rallies could restart, but only with appropriate social distancing and attendees wearing face masks. "I do think it's the obligation of the organization to say, 'If you're going to come to our event, this is how we're going to protect you.'"

With no campaign rallies on the schedule, the president has made a series of official trips to battleground states like Pennsylvania and Michigan.

The Trump reelection team is also hosting a lineup of livestreams every night of the week.

Newsy reached out to the Trump campaign, which declined to comment on future events.

His campaign has said it's listening to health care experts before returning to the campaign trail.

"The president should follow the rules instead of showing up at places without masks and the whole thing," Biden added.