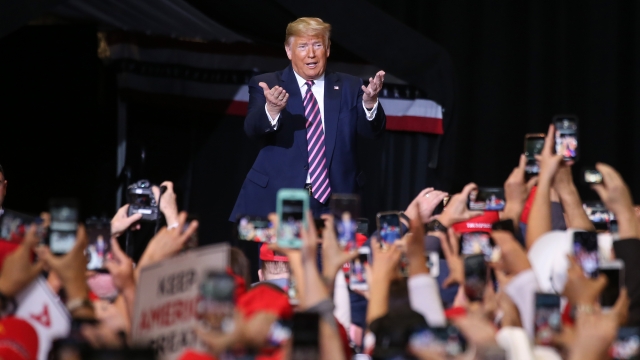 "But I'm delighted to be back in a state I love. I have a beautiful building just right down the road," President Trump said.

Democrats aren't the only ones campaigning in Nevada ahead of the state's caucuses.

"With your help this November, we're going to defeat the radical, socialist Democrats. And we are going to win Nevada in a big, beautiful landslide," President Trump said.

President Donald Trump held one of his signature campaign rallies in Las Vegas on Friday. He previously held rallies in Iowa and New Hampshire in the days leading up to primary voting in those states.

The president is keeping an eye on the race for the Democratic nomination. He tuned in to watch the Nevada debate while traveling on Air Force One. And he frequently uses Twitter to attack his potential rivals, targeting many of his recent tweets at Mike Bloomberg.

Some recent polling gives Democrats the advantage in the November general election. In hypothetical head-to-head match-ups, multiple polls from the past week show President Trump losing to any of the Democratic candidates.

The president has responded to poll numbers like that on Twitter, claiming that "Internal REAL Polls show I am beating all of the Dem candidates."

Outside his rally in Las Vegas, Newsy spoke to some of the president's supporters who seem unconcerned about the recent poll numbers.

"If you go by the polls back in 2016, they all came back Hillary Clinton winning, and he actually pulled out an upset," said Victor Goodman.

"They proved to us last year in 2016 that the polls are not true," said Shelly Rogers.

"It's going to be, like, the biggest victory ever in history. I've been saying it from the beginning. It's not even going to be a contest," said Danny George.