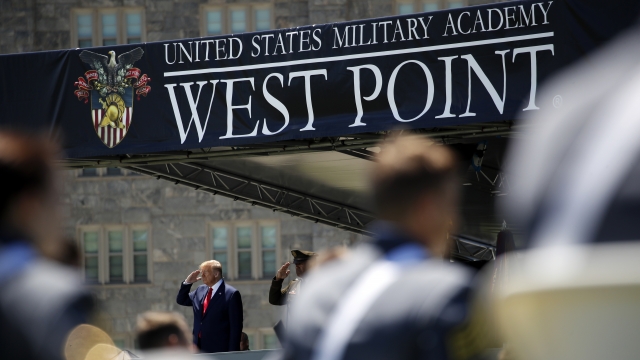 Over 1,000 graduates were seated with social distancing for the commencement ceremony.

President Donald Trump gave a speech to the latest crop of West Point graduates on Saturday.

"You have come from the farms and the cities, from states big and small, and from every race, religion, color, and creed," said the president. "But when you entered these grounds, you became part of one team one family, proudly serving one American nation.''

Over 1,000 graduates were seated with social distancing at the U.S. Military Academy for the commencement ceremony.

All the students were tested for coronavirus and separated into groups of 250 for a two-week quarantine ahead of the ceremony.

The president praised the military for carrying on "traditions of freedom, equality and liberty." He also commended National Guard members deployed amid anti-racism demonstrations.

He told graduates, "I also want to thank the men and women of our National Guard who respond with precision to so many recent challenges, from hurricanes and natural disasters to ensuring peace, safety and the constitutional rule of law on our streets."