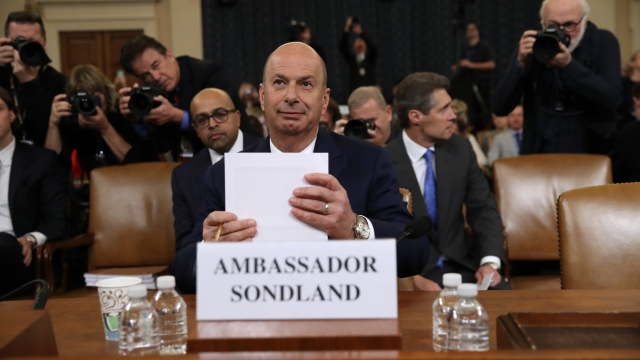 SMS
President Trump Fires EU Ambassador Gordon Sondland
By Joshua Kranzberg
By Joshua Kranzberg
February 7, 2020
In November, Sondland told Congress that Ukrainian aid was tied to a public announcement of an investigation into Burisma Holdings and the Bidens.
SHOW TRANSCRIPT

Hours after Lt. Col. Alexander Vindman was escorted out of the White House, another person who testified against President Donald Trump is out, too.

Sondland said in a statement, "I was advised today that the president intends to recall me effective immediately." He thanked President Trump "for having given me the opportunity to serve."

In November, Sondland testified that security assistance to Ukraine was tied to a public announcement of an investigation into the 2016 election and Ukrainian energy giant Burisma.

"I know that members of this committee frequently frame these complicated issues in the form of a simple question: 'Was there a quid pro quo?' As I testified previously, with regard to the requested White House call and the White House meeting, the answer is yes."

Both the decisions on Sondland and Vindman were announced just 48 hours after the Senate voted to acquit President Trump of both articles of impeachment.