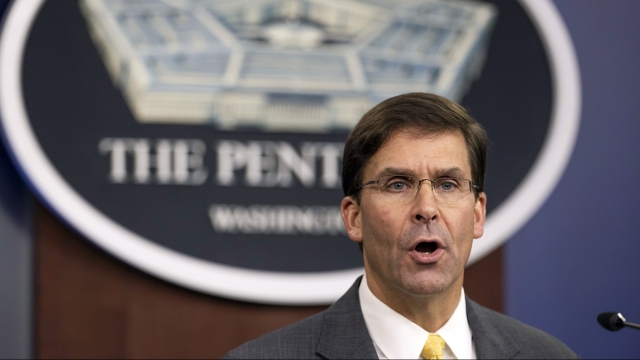 President Trump has fired Defense Secretary Mark Esper after a relationship that became more and more troubled, and named Christopher Miller, the Director of the National Counterterrorism Center, the acting secretary "effective immediately."

Secretary Esper’s firing was announced on Twitter two days after Joe Biden and Kamala Harris were projected the winners of the 2020 election. Trump’s tweet simply said Esper had been “terminated.”

Esper had publicly pushed back in June on using active-duty troops to quell widespread demonstrations following the death of George Floyd. The president had threatened to use the Insurrection Act, which would have cleared the way to use the military.

Esper’s comments came after the National Guard had been used to intimidate protesters near the White House, making it possible for President Trump to stage a photo shoot at St. John’s Church across Lafayette Square.

The defense secretary said military forces should only be used to assist law enforcement as a last resort.

In August, the president stated, "I consider firing everybody. at some point, that's what happens," when asked if he was considering getting rid of Esper, whom he had nicknamed “Mr. Yesper.”

Historically President Trump has fired people he feels are not loyal. However he has not specifically stated why he fired his second Secretary of Defense. Newsy asked the Pentagon for comment on the firing but was told to reach out to the White House.