President Trump, Democrats Respond To 'Send Her Back' Chant 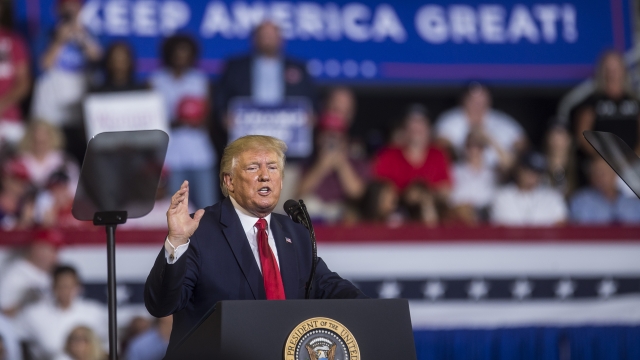 President Donald Trump, as well as multiple lawmakers, have responded to the chants made by a crowd at his campaign rally to "send [Rep.IIhan Omar] back."

On Thursday, President Trump said he disapproved of the North Carolina audience's chant. He also said he tried to stop it.

"I disagree with it, by the way. But it was quite a chant. And I felt a little bit badly about it," President Trump said. "But I will say this, I did — and I started speaking very quickly. But it started up rather — rather fast, as you probably noticed."

"So you'll tell your supporters never to say it again?" asked a reporter.

"I was not happy with it. I disagree with it," President Trump said. "But again, I didn't say — I didn't say that, they did."

President Trump said he started "speaking very quickly" when the chant started, but the video tells a different story.

"And obviously and importantly, Omar has a history of launching vicious, anti-Semitic..." President Trump said. (Crowd chants, "Send her back")

Several lawmakers have expressed their discontent over the chant. Republican Rep. Adam Kinzinger tweeted that despite his disagreements "with the extreme left ..., chants like 'send her back' are ugly, wrong, & would send chills down the spines of our Founding Fathers."

Democratic Rep. Al Green said the chant was indicative of a rise in bigotry and hate in the country, and announced he'd introduce a bill asking for more security for members of Congress "to thwart the efforts of those who might want to harm a member."

Rep. Alexandria Ocasio-Cortez said she believes the president's rhetoric not only endangers individual members of Congress, but also millions of Americans.

"It's about creating a volatile environment in this country through violent rhetoric that puts anyone like Ilhan, anyone who believes in the rights of all people, in danger, and I think that he has a responsibility for that environment," Ocasio-Cortez said.

Rep. Omar responded to the chant Wednesday with a tweet quoting Maya Angelou's poem "Still I Rise." Omar wrote: "You may shoot me with your words, You may cut me with your eyes, You may kill me with your hatefulness, But still, like air, I'll rise."

When asked if she was scared for her safety on Thursday, Omar said she wasn't so much worried for her own safety as she was for "the safety for people who share [her] identity."

"I want to remind people that this is what this president and his supporters have taught our country that is supposed to be a country where we allow democratic debate and dissent to take place," Omar said. "And so this is not about me. This is about us fighting for what this country truly should be."

Over the weekend, the president indirectly tweeted about four Democratic congresswomen of color, including Omar, telling them to "go back" to where they came from. The House approved a resolution condemning the racist tweets shortly after.