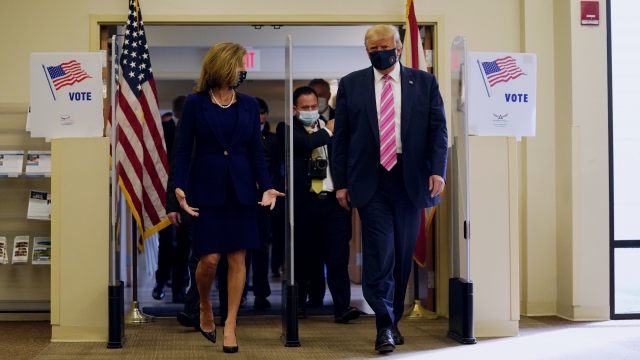 SMS
President Trump Casts His Ballot In-Person In Florida
By Bailey Vogt
By Bailey Vogt
October 24, 2020
The president said it was an "honor" to vote for "a guy named Trump."
SHOW TRANSCRIPT

President Trump cast his ballot in the 2020 election Saturday.

The president said it was an "honor" to vote for "a guy named Trump." He do so in person in his registered state of Florida — where he moved his registration last year.

President Trump entered an early voting location after a night of campaigning at his Mar-a-Lago resort.

He complied with the location's mask requirement as he cast his ballot.

Greeted by supporters, the president advocated for in-person voting — claiming without evidence that mail-in voting is less "secure."

President Trump  then left for campaign stops in North Carolina, Ohio and Wisconsin.