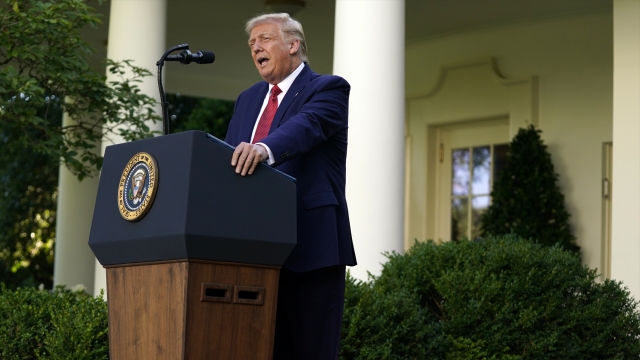 President Donald Trump is finding ways to campaign while not officially being out on the trail.

"Bureaucratic reviews under the Obama-Biden administration have been a disaster," President Trump said during an event in Atlanta.

That was the president at an event in Atlanta on Wednesday focused on infrastructure. With large rallies put on hold, the president has used official White House events to highlight policy positions and blast his challenger and presumptive Democratic presidential nominee, Joe Biden.

One day earlier the president used a Rose Garden press conference — advertised as an announcement about China — to deliver attacks on the former vice president citing everything from climate change to his family to Biden's own history with China.

"We hold China fully responsible for concealing the virus and unleashing it upon the world. They could've stopped it. They should've stopped it. It would've been very easy to do at the source when it happened. In contrast, Joe Biden's entire career has been a gift to the Chinese Communist Party and to the calamity of, of errors that they've made."

President Trump is eager to get back on the campaign trail after a planned outdoor rally in New Hampshire was postponed due to a tropical storm. In the meantime, we could see more speeches like the one in the Rose Garden — something Republican strategist Joseph Pinion says is a departure from precedent.

"It's been perhaps more subtle in the past, but in a world where you cannot have rallies, in a world where you really can't even get in the room with people most of the time, I think we just need to accept the fact that there are going to be times when the president of the United States has to talk about things that are campaign-related from the confines of the White House."

A Trump 2020 official told Newsy that the president and those on his campaign will always find a way to deliver their message to the American people, especially when it comes to pointing out differences between President Trump and Biden.

“What we heard in the Rose Garden today wasn't a president at all. It was a politician who sees his re-election slipping away from him and who is furious that his own botched response to the coronavirus pandemic has denied him the campaign events he so craves," said Kate Bedingfield, the deputy campaign manager and communications director for Jo Biden's campaign.