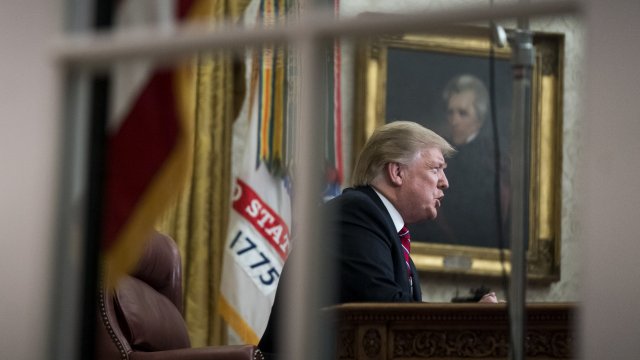 President Trump visited Texas on Thursday, and he continued pushing for a border wall that he says would stop an alleged influx of crime into the U.S.

"If we had a barrier of any kind, a powerful barrier, whether it's steel or concrete ... we would stop that cold," said the president.

He visited McAllen, Texas, the day after walking out of a meeting with Democratic leaders who he said would not agree to end the ongoing government shutdown in exchange for wall funding. In recent days, President Trump has apparently been looking for other ways to pay for a wall, including potentially diverting military funds by declaring a national emergency.

"I have the absolute right to declare a national emergency. The lawyers have so advised me. I'm not prepared to do that yet. But if I have to, I will. I have no doubt about it; I will," the president said.

Despite the uncertainty around border wall funding, the Senate has just approved a bill to extend retroactive pay to all federal employees after the government shutdown ends.