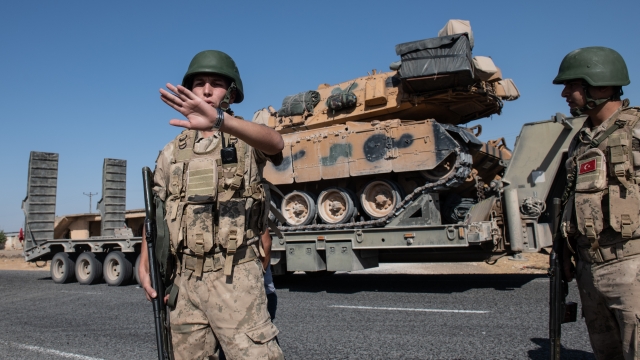 The U.S. has imposed sanctions on Turkey amid growing conflict in northern Syria.

"The sanctions that were announced today will continue and will worsen unless and until Turkey embraces an immediate cease-fire, stops the violence, and agrees to negotiate a long-term settlement of the issues along the border between Turkey and Syria," Pence said.

President Trump announced Monday he would issue an executive order imposing sanctions on "current and former officials of the Government of Turkey and any persons contributing to Turkey's destabilizing actions in northeast Syria." That includes bumping tariffs on Turkish steel back up to 50%, as well as "immediately [stopping] negotiations ... with respect to a $100 billion trade deal" with the country.

Treasury Secretary Steven Mnuchin also announced sanctions against three Turkish ministers, along with Turkey's ministries of defense and energy. He said the administration is "prepared to impose additional sanctions ... as necessary."

This comes amid growing backlash to President Trump's decision to withdraw U.S. troops from the region. Turkey launched an offensive against Kurdish fighters in northern Syria shortly after the U.S. announced it was leaving.

Pence told reporters that President Trump has since spoken to Turkish President Recep Tayyip Erdoğan and told him the U.S. "wants Turkey to stop the invasion, implement an immediate cease-fire and to begin to negotiate with Kurdish forces in Syria to bring an end to the violence."