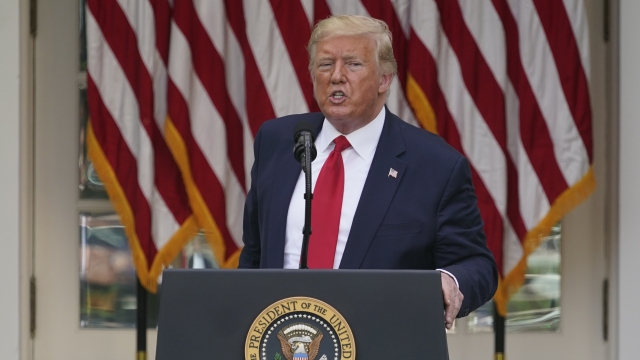 SMS
Trump Lashes Out After Twitter Applies Warning Label To His Tweets
By Tyler Adkisson
By Tyler Adkisson
May 27, 2020
The social media company flagged the president's unsubstantiated claims on fraud with mail-in voting.
SHOW TRANSCRIPT

After Twitter applied its first-ever fact-check label on a pair of Donald Trump’s tweets, the president took to Twitter to accuse the platform of infringing on his right to free speech.

On Tuesday night, the president accused Twitter of “interfering in the 2020 Presidential Election” and “stifiling free speech” for correcting his unsubstantiated claims about mail-in ballots being fraudulent. It should be noted that Twitter is legally allowed to add these sorts of notices to anyone's tweets.

While this is the first time Twitter fact-checked Trump, the president has a long history of breaking Twitter’s rules, often without consequences. In 2017, Trump tweeted a thinly-veiled threat toward North Korea, saying “they won't be around much longer!”

Twitter said that tweet broke rules against  “promoting violence.” However, the company chose to leave the tweets up because they were “newsworthy” and “of public interest.”

Of all the Trump tweets that’ve violated Twitter rules, it’s likely the labels were applied here because they deal with false information about voting, something the company has recently taken a stronger stance on. In April, Twitter rolled out a new reporting tool designed to flag posts that contain misleading information about elections.

Trump’s claims about social media silencing conservative voices are also hard to support. Since taking office, Trump’s own Twitter following has gone from 20 million to 80 million.

“Now I will note, much of the argument in this topic is anecdotal. It's based on one example or another example,” Cruz said. “Nobody knows what the raw data is in terms of bias.”

Trump isn’t the only world leader seeing increased speech enforcement from Twitter, either. In March, the platform removed two tweets from Brazilian President Jair Bolsanaro for containing misleading information about hydroxychloroquine, and for encouraging an end to social distancing.