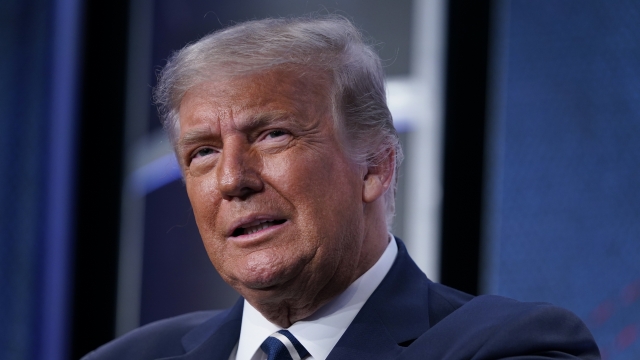 SMS
President Trump Announces Emergency Authorization For Plasma Treatment
By Alex Arger
By Alex Arger
August 23, 2020
Many scientists and physicians believe that convalescent plasma might provide some benefit but it is far from a breakthrough.
SHOW TRANSCRIPT

On Sunday, President Donald Trump announced the emergency authorization of convalescent plasma as a treatment for COVID-19.

"This is a powerful therapy that transfuses very, very strong antibodies from the blood of recovered patients to help patients battling a current infection," said President Donald Trump.

The timing of the announcement is worth noting. The president's Sunday evening speech in the Rose Garden follows recent suggestions from the administration that the Food and Drug Administration had made politically motivated delays to approve a vaccine and other treatments. It also comes on the eve of the start of the Republican National Convention.

The president had previously tweeted his criticism at the FDA Saturday, tagging Commissioner Dr. Stephen Hahn in the message.

"If they don't see the light, they need to feel the heat because the American people are suffering," White House Chief of Staff Mark Meadows said on ABC's "This Week" on Sunday. "This president knows it and he's going to put it on wherever, if it's the FDA or NIH or anybody else, he's going to make sure that we deliver on behalf of the American people."

The Mayo Clinic reported preliminary data from 35,000 coronavirus patients, saying fewer of them died in two instances: those treated within three days of diagnosis and those given plasma with the highest levels of antibodies. But this Mayo Clinic trial wasn’t a formal study.

Many scientists and doctors believe convalescent plasma might provide some benefit but say it's far from a breakthrough. There’s no solid evidence yet that it fights the coronavirus and, if so, how best to use it. The approach has been used for centuries when new diseases come along.