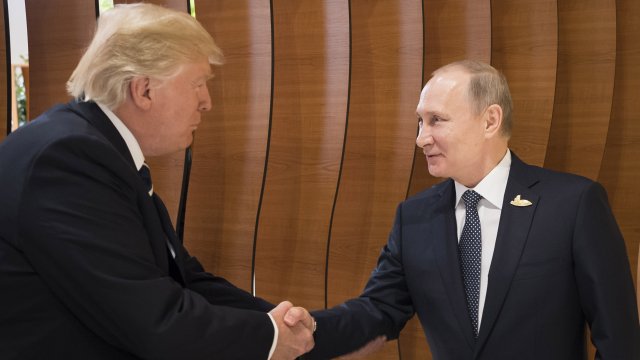 SMS
President Trump, Vladimir Putin Discuss Mueller Report Over Phone Call
By Alec Larson
By Alec Larson
May 3, 2019
​According to Sanders, the White House will soon release an extensive summary of the conversation.
SHOW TRANSCRIPT

President Donald Trump spoke with Russian President Vladimir Putin over the phone on Friday, discussing the Mueller report, among other topics. It's the first conversation the two leaders have had since the report's release.

In a conversation that ran for over an hour according to White House Press Secretary Sarah Sanders, Trump and Putin reportedly discussed the ongoing crisis in Venezuela, a potential nuclear deal between Russia and China, and the situation in Ukraine.

In regards to the Mueller report, Sanders said the two world leaders only discussed the topic "very, very briefly."

Trump also noted the topic of Russia's potential meddling with American elections did not come up.

Trump tweeted shortly after the call, saying, "Had a long and very good conversation with President Putin of Russia...getting along with Russia, China and everyone is a good thing, not a bad thing."

According to Sanders, the White House will soon release an extensive summary of the conversation.