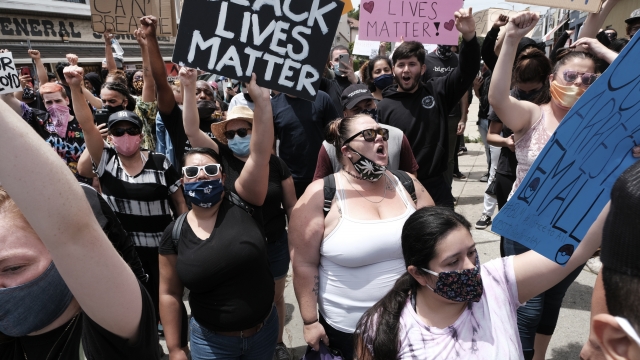 In a teleconference with governors Monday, President Donald Trump took a hard line. calling the governors “weak” and urging them to “dominate” protesters.

“New York is going to have to toughen up. We will send you National Guard if you want, but you have the largest police force in the country, 40,000 people, I understand. But what’s going on in New York is terrible,” said President Trump.

“I am mobilizing all available federal resources, civilian and military, to stop the rioting and looting,” said Trump.

This after a weekend of tweets where President Trump called antifa and radical leftists the source behind the protests, all but ignoring the largely peaceful and passionate demands for change.

It was a sharp contrast to presumptive Democratic presidential nominee Joe Biden, who this weekend attended a protest in his hometown of Wilmington, Delaware.

He then spent Monday morning taking notes — and some heat — from community leaders gathered at a Delaware church, sharing their perspective on recent events.

“We have had so many programs, but the programs have not worked to the level that we need to see," said Delaware congresswoman Lisa Blunt.

He then hosted a virtual roundtable discussion with Democratic mayors from across the country.

"The contrasts between the vice-president's response to the protests and President Trump’s have become something of a political football, with some saying the president’s tweets only further the division."

“He should just stop talking, this is like Charlottesville all over again,” said Atlanta Mayor Keisha Lance Bottoms.