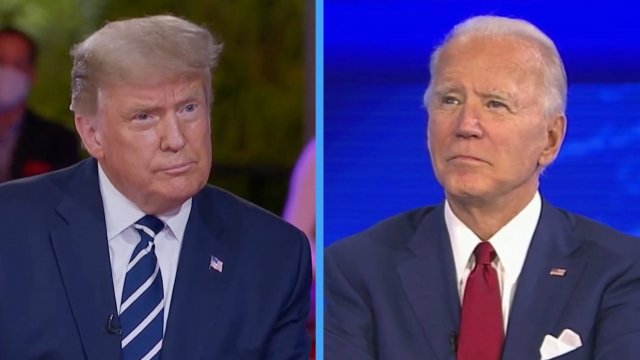 It was a night of dueling town halls with President Donald Trump and Joe Biden answering questions on a range of topics — with the coronavirus pandemic in focus.

"The cure cannot be worse than the problem itself, we did the right thing," said President Trump. "We were expected to lose 2,200,000 people and maybe more than that."

The President on NBC from Miami and Joe Biden taking part in a town hall on ABC from Philadelphia.

The 2020 candidates were originally scheduled to debate in-person in Miami but that event was changed to a virtual format after President Trump's COVID-19 diagnosis. The president then backed out of the virtual event forcing organizers to cancel.

Lagging behind in most national and battleground state polls, the president said he would only accept a peaceful transfer of power if the election were "honest" repeating his unfounded claims on widespread voter fraud.

"And then they talk about, 'Will you accept a peaceful transfer?' And the answer is, yes, I will. But I want it to be an honest election and so does everybody else. When I see thousands of ballots dumped in a garbage can and they happen to have my name on it, I'm not happy about that," Trump said.

On the current fight to get Judge Amy Coney Barrett confirmed to the Supreme Court, the President said he did not tell Barrett how to rule on issues such as abortion, even declining to clearly state his own position.

"I did not tell her what decision to make, and I think it would be inappropriate to say right now because I don't want to do anything to influence her," Trump said.

And Biden punted on a question about court packing.

"But don't voters have a right to know?" moderator George Stephanopoulos said.

"They do and they'll have a right to know where I stand before they vote," Biden said.

"So, you'll come out with a clear position before Election Day?" Stephanopoulos said.

"Yes. Depending on how they handle this," Biden said.

Each took questions about their past. Biden spoke about his support of the 1994 Crime Bill.

"Was it a mistake to support it?"Stephanopoulos said.

Biden responded: "Yes, it was. But here's where the mistake came. The mistake came in  terms of what the states did locally. Black folks went to jail a lot less than they would have before, but it was a mistake."

And for President Trump his tax returns were again in focus. Asked about a reported debt of $421 million, he described it as "a peanut."

At the end of the night the president explained to voters why he deserves a second term, focusing on the economy.

"We've rebuilt so much. We've given you the greatest tax cut in the history of our country, greatest regulation cut, equally as important. And we created new levels of jobs that nobody thought was possible. And next year is going to be better than ever before," Trump said.

Biden struck a unifying message, which has been at the core of his campaign's theme.

Both candidates are set to meet in Nashville for the last Presidential debate on Thursday, October 22, just days before Election Day.