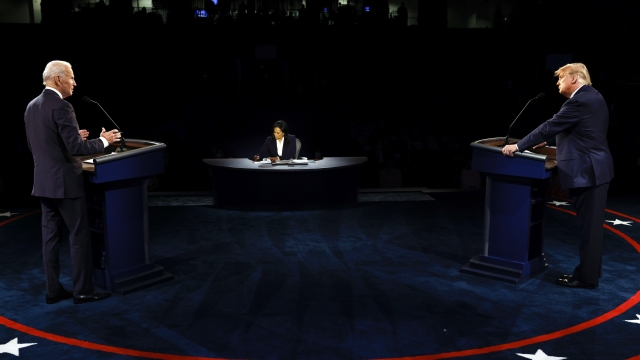 A shift in tone during the final debate between President Donald Trump and Democratic nominee Joe Biden.

After the first debate proved less than substantive, the Commission on Presidential Debates muted candidates' microphones during portions of the question period to avoid interruptions.

Though the pace of the debate proved different from round one, the personal attacks were still evident, each candidate spending considerable time denying accusations made about them.

"I have not taken a penny from any foreign source ever in my life. We learned this president paid 50 times the tax in China as a secret bank account, has one with China," Joe Biden said.

When asked about his plans to combat the coronavirus, President Trump focused mostly on the need to reopen the country to jump-start the economy.

Biden, on the other hand, calling for a more cautious approach focused on preventing the spread.

The candidates laid out drastically different visions for the country. President Trump calling for the termination of Obamacare, and Biden calling for building on it by adding a public option. They also argued about racism in America and how to handle immigration issues.

"We now have as strong a border as we've ever had. We are over 400 miles of brand-new wall. You see the numbers and we let people in, but they have to come in legally," Trump said.

"What happened? Parents, their kids were ripped from their arms and separated. And now they cannot find over 500 sets of those parents, and those kids are alone. Nowhere to go. Nowhere to go. It's criminal," Biden said.

With the debates now over, the candidates now turn their attention to turning out their supporters in key states — as well as those voters who still need to mail in their ballots.