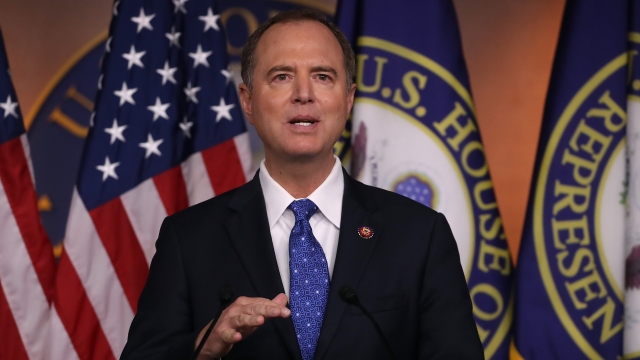 The president tweeted: "Rep. Adam Schiff illegally made up a FAKE & terrible statement, pretended it to be mine as the most important part of my call to the Ukrainian President, and read it aloud to Congress and the American people. It bore NO relationship to what I said on the call. Arrest for Treason?"

President Trump has already demanded that Schiff resign over how the congressman characterized a phone call between President Trump and Ukraine's leader during a congressional hearing. He has also accused Schiff of lying to Congress.

Schiff has said his summary of the president's call "was meant to be at least partly parody." He introduced it by saying, "In not so many words, this is the essence of what the president communicates."

President Trump has repeatedly said his conversation with Ukraine's president was "perfect."

But let's step back a little. On Sunday, President Trump said he wanted Schiff "questioned at the highest level for Fraud & Treason."

According to the Constitution: "Treason against the United States, shall consist only in levying war against them, or in adhering to their enemies, giving them aid and comfort. No person shall be convicted of treason unless on the testimony of two witnesses to the same overt act, or on confession in open court."

In short, what Schiff did does not seem to qualify as treason.

Schiff is leading the impeachment inquiry against the president, and on Sunday he told ABC's "This Week" the whistleblower would testify before the House Intelligence Committee "very soon." President Trump has said he "deserves" to meet the whistleblower.