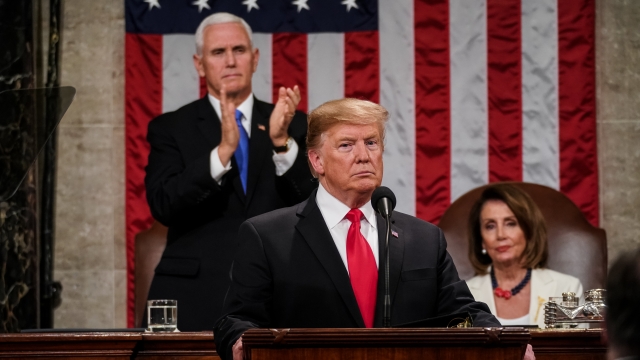 President Donald Trump has accepted House Speaker Nancy Pelosi's invitation to deliver the State of the Union address next year.

In a letter from Pelosi to the president on Friday, she said she was extending the invitation "in the spirit of respecting our Constitution." President Donald Trump is to deliver the State of the Union address before a Joint Session of Congress on Feb. 4 — just a day after the Iowa caucuses.

Pelosi's invitation for President Trump comes just days after the House voted to impeach him, making him the third president in U.S. history to be impeached.

Before that vote, President Trump sent a six-page letter to Pelosi that criticized his political opponent Joe Biden, U.S. Rep. Adam Schiff and her decision to hold a vote on impeachment.

In his letter, he wrote: "By proceeding with your invalid impeachment, you are violating your oaths of office, you are breaking your allegiance to the Constitution, and you are declaring open war on American Democracy."

On Wednesday, the House voted to impeach the president on articles of abuse of power and obstruction of Congress. However, Pelosi hasn't sent the articles to the Senate for a trial. Democrats want to know the trial format and whether witnesses will be called.

"So far we haven't seen anything that looks fair to us, so hopefully it will be fairer and when we see what that is we'll send our managers," Pelosi said on the night of the impeachment vote.

For now, it's unclear when the trial will take place and whether it will be ongoing when President Trump delivers his address.

Pelosi threatened to block President Trump's last State of the Union address last February, declaring the address "has never been delivered during a government shutdown." But she extended an invite after a deal was reached to reopen the government.