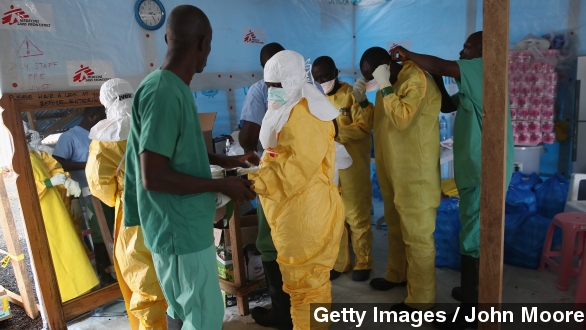 By Sebastian Martinez
September 16, 2014
President Obama is expected to send 3,000 troops to West Africa as part of the effort to contain Ebola's spread.
SHOW TRANSCRIPT

U.S. troops appear to be the latest part of the effort to fight Ebola in West Africa — 3,000 of them, in fact. (Video via U.S. Department of Defense)

That's according to multiple reports on Tuesday morning, like this one from The Washington Post, which specified many of those will be medical personnel and engineers, who will "set up 17 treatment centers in Liberia — each with a 100-bed capacity."

Although it's not uncommon for the U.S. to deploy engineers to disaster zones, both at home and abroad, the deployment of 3,000 military personnel would be a big commitment to a crisis the U.S. has so far mostly kept out of. (Video via U.S. Department of Defense)

The U.N. security council is set to meet later this week to discuss the international response to the outbreak, after a request from the U.S.'s ambassador Samantha Power.

U.N. AMBASSADOR SAMANTHA POWER, VIA DAILY MAIL: "Without immediate international action, we are facing the potential for a public health crisis that could claim lives on a scale far greater than current estimates and set the countries of West Africa back a generation."

And the president's expected announcement of troops will likely constitute the U.S.'s part of that international action. (Video via The White House)

BBC: "The United Nations is calling for $600 million to deal with the crisis and is asking countries to send supplies including trucks, beds and doctors to the worst affected areas."

The decision comes amid fears from some sectors that the virus could mutate to become airborne and subsequently more contagious.

NEIL CAVUTO, FOX NEWS: "Now we've been telling you for weeks that this virus has been mutating and Dr. Jorge Rodriguez is worried it's not long before it could — could — become airborne."

But some experts have termed such a mutation extremely unlikely, as one researcher told Time, "Practically speaking, it is not likely. ...  it’s not impossible. But it’s very unusual for a virus to change how it’s transmitted.”

The virus hasn't needed to mutate to infect thousands of people across West Africa with Liberia — where the U.S.'s efforts will reportedly be focused. The WHO reports the area has the highest total number of infections and deaths. (Video via CNN)

According to the WHO, more than 4,000 people have been infected with the virus in West Africa, and more than 2,300 have died.