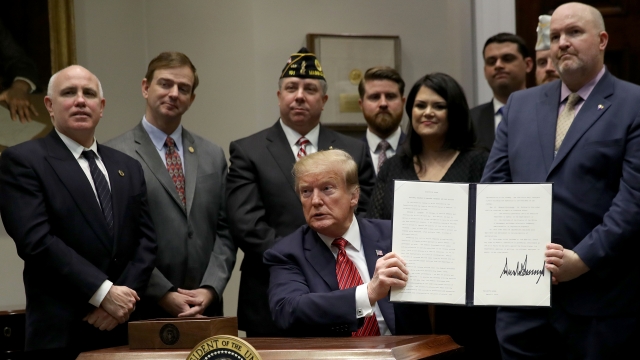 President Donald Trump signed an initiative to design a roadmap aimed at helping veterans "pursue an improved quality of life."

The “President’s Roadmap to Empower Veterans and End a National Tragedy of Suicide,” or PREVENTS Initiative, establishes a task force to help veterans "pursue an improved quality of life." During the president's signing ceremony, the director of the Arizona Coalition for Military Families said this is "exactly what this country needs" and is going to "make a huge difference."

According to the U.S. Department of Veterans Affairs' most recent analysis of suicide rates, which is from 2005-2015, an average of 20 service members and veterans die by suicide each day.

Secretary of Veterans Affairs Robert Wilkie lauded the efforts of those who help, referencing an incident last month, where a vet shot and injured two people while receiving treatment in Florida.

"Since 2017, VA employees, doctors, nurses, technicians, policeman have saved 243 veterans just like the one that our heroes saved in Palm Beach, but since 2017, 19 veterans have not been saved," Robert Wilkie said. "That is what today's ceremony is about. It is about pulling together the resources of the federal government, our states and localities, our charities, our non-governmental organizations and coming together with a roadmap and the resources to make sure we no longer have those 19."

President Trump has made helping veterans one of his main issues since taking office. Last year, he signed an executive order to connect veterans with mental care and suicide prevention resources as they transition back to civilian life.