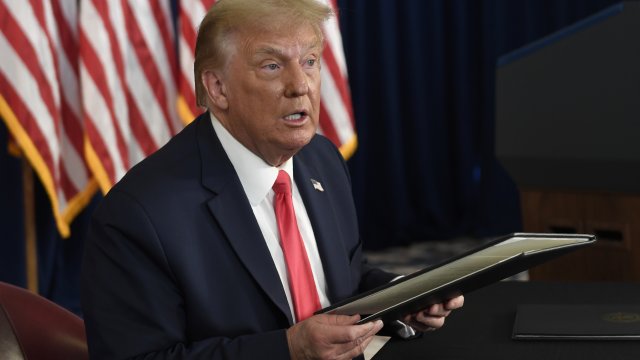 SMS
President Trump Promises To Keep Stars And Stripes Newspaper Alive
By Alex Arger
By Alex Arger
September 5, 2020
This comes after a memo from the Defense Department was released Friday, saying the paper would cease publication due to budget cuts.
SHOW TRANSCRIPT

He tweeted, "The United States of America will NOT be cutting funding to @starsandstripes magazine under my watch. It will continue to be a wonderful source of information to our Great Military!" The comments came after media reports Friday on a Department of Defense memo on the publication's pending demise.

Stars and Stripes was first produced during the Civil War by Union Soldiers and has printed regularly, with editorial independence, since World War II.

The Defense Department first notified the paper of potential funding cuts in February, but now it says the paper will print its last edition September 30 and be completely dissolved by February of the next year.

Congress and the president could still keep the outlet alive with new funding. The House has voted to fund the publication, but the Senate still hasn't considered the matter. The paper receives 35% of its budget from the federal government.

A bipartisan group of senators called on the Defense Department to maintain funding of the publication. Senator Lindsey Graham wrote Secretary of Defense Mark Esper, saying it would be "premature" to close the outlet before the Senate makes a budget decision.

President Trump's response comes after he denied a report by The Atlantic that he referred to American soldiers killed in combat as "losers" and "suckers." A Military Times poll released this week indicated he may be losing support from active-duty service members, with nearly half of those polled expressing disapproval for the president's performance.