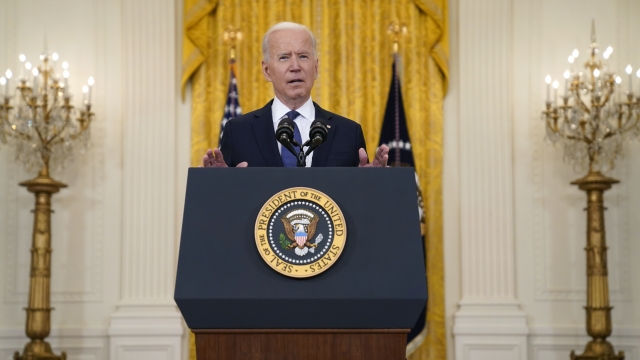 The president is pushing back on the argument that higher unemployment checks are preventing Americans from returning to work.

Some lawmakers and businesses have blamed the American Rescue Plan's larger unemployment checks, arguing Americans are making more money on unemployment than by working.

The president says his administration "hasn't seen much evidence of that."

"We're going to make it clear that anyone collecting unemployment, who is offered a suitable job, must take the job, or lose their unemployment benefits. There are a few COVID-19 related exceptions so that people aren't forced to choose between their basic safety and a paycheck but otherwise that's the law," said President Biden.

On Monday, the White House announced $350 billion for state, local and tribal governments. They can use the funds for a number of things including rehiring workers, food and housing assistance and expanding broadband internet access.

The administration has also sent out relief checks totaling over $2 billion to 16,000 restaurants impacted by the pandemic. The money comes from the Restaurant Revitalization Fund which is part of the American Rescue Plan.