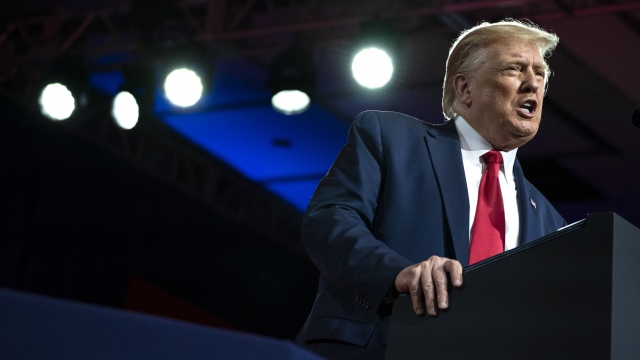 Kellan Howell: "Now what I found the most interesting about the president's comments Jay, was that he really emphasized Amy Coney Barrett's dedication to reading the laws as both a textural list and an originalist. We talked about this a bit earlier. You heard the president emphasis multiple times. Amy Coney Barrett, he said she will decide cases based on the text of the Constitution as written. He said, you are not there to decide cases as you prefer so you know, a little bit of a jab at some of the more liberal justices who may take a bit more of a modern interpretation of the Constitution and of the law. There was also a lot of nods to the former Justice Antonin Scalia. You and I talked earlier about Amy Coney Barrett affiliation with Scalia. She used to clerk for him, as you just mentioned. There were members of the late Justice Scalia's family in the audience at the Rose Garden and the president gave some shout outs to a few of those members. So you saw there really emphasizing again how much the Republican Party and this president really loved Antonin Scalia and how they see Amy Coney Barrett as a very similar justice to Scalia, so that's something that's very important to them on. The president also went on to say that he felt that this should be a very easy confirmation, very quick and not controversial. Of course, that probably isn't going to be the case Jay. As we've been talking about a lot this week, there's already a lot of controversy stirring up in the halls of Congress over this confirmation process. And I want to point out a couple of things that Amy Coney Barrett herself said that I found interesting. You mentioned about how she had a lot of praise for the former Justice Ginsburg. I thought it was interesting that she said, Quote, I pledged to discharge the responsibilities of this job to the very best of my ability. And she also said that she will be mindful of who came before me, so that's interesting. I think that might be something that gets brought up during her confirmation hearing. You might hear from some Democrats asking her about you know how she plans to be mindful of the late Justice Ginsburg. She also said that she has no allusions that the role of head of her will not be easy. So, a little bit of a nod to the tough road ahead in terms of her confirmation, Jay."