New Questions About Russia's Endgame After No Victory Day Declaration 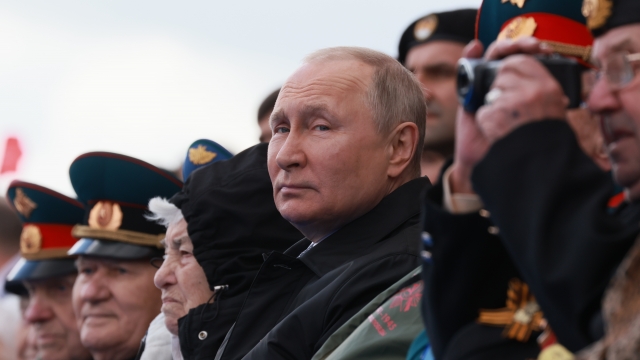 SMS
New Questions About Russia's Endgame After No Victory Day Declaration
By Sasha Ingber
By Sasha Ingber
May 9, 2022
The Pentagon says Russian morale remains low, with some mid-level officers refusing to obey orders.

"The danger grew every day," he said. "Russia has preemptively repulsed an aggression. It was a forced, timely, and the only correct, decision."

As a parade of military might rolled on, the question of what the Russian president intends to do next lingers.

"The situation on the ground indicates to us that Russia needs to consolidate. They do not have enough troops on the ground to attempt any extensive operations over the coming weeks," said Janes Group Russia Military Expert Kostas Tigkos.

Putin did not declare a mass mobilization of troops on the historic day. That's why Tigkos says Moscow appears to be narrowing its focus by prioritizing Odessa, a city that sits on the Black Sea and the scorched city of Mariupol to its east.

"The areas in the east were heavily defended by the Ukrainians and the quality of the troops on the ground, they were more experienced, more battle hardened, and as a result, they are better equipped and they are able to defend themselves better," Tigkos said.

But some forces are likely to be pulled away from that effort, according to analysts at the Institute for the Study of War. They say Russian troops will likely redeploy to Ukraine's second largest city, Kharkiv, after Ukrainians regained ground over the weekend. The analysts believe Russia may also be planning a new offensive in the south that’s unlikely to be successful.

"It's incremental. And it's still plodding, as I've said," Pentagon Press Secretary John Kirby said. "It's slow and uneven. They continue to meet very stiff Ukrainian resistance. So no, we would not call it a stalemate in the classic sense that everything is frozen. It's not frozen."

Experts say Russia will continue to rely heavily on artillery. Russia's stockpile of precision-guided munitions is now heavily depleted and will be a struggle to replenish, according to British intelligence. That could mean they use more indiscriminate weapons that kill civilians.

Meanwhile, repatriating the dead left behind on the battlefield has plagued Moscow, according to Ukrainian intelligence. It has become endless evidence that Putin's war is not going according to plan.