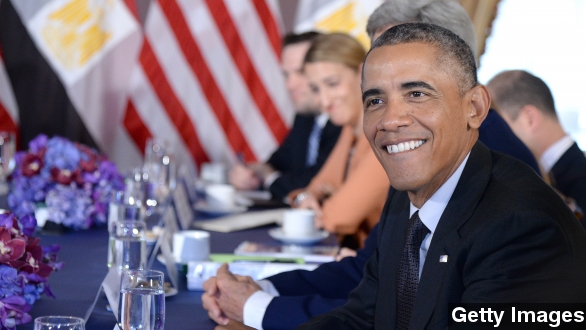 Some holiday cheer for President Obama as a new Gallup poll has his approval rating at 47 percent, a seven-month high.

It's been a good month for the president, with his popularity bolstered by the recently announced plans to re-establish trade relations with Cuba.

He even took a comedic turn, stepping into the host's chair on one of the final episodes of "The Colbert Report."

And the president cited lower oil prices and an increase in job creation in his end-of-the-year press briefing, calling 2014 a "breakthrough year" for the economy.

But it's not all good news for the president. Despite the recent bump, he's still underwater with a 49 percent disapproval rate.

And he ranks lower than three out of the past four two-term presidents at the same stage in their presidency, beating out only George W. Bush.

And in Military Times' annual survey, just 15 percent of active-duty service members approved of Obama's job as commander in chief, while more than half said they disapprove.

The outlet notes Obama has "aggressively sought to change military culture" and for some troops "the wave of changes to deep-seated policies and attitudes can be jarring."

Obama is currently in Hawaii on his annual holiday vacation.