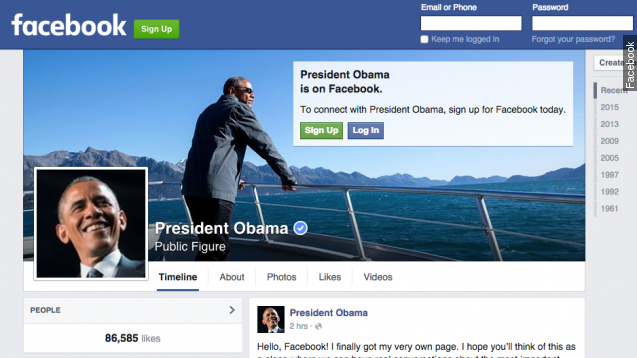 By Sebastian Martinez
November 9, 2015
President Obama has joined Facebook. Yes, he already had a campaign profile and an official White House profile, but still. It's about time.
SHOW TRANSCRIPT

Yes, he was already kind of on Facebook, with a campaign page, and The White House page available for him to use.

But this is his personal page, and he's already been welcomed by commenters like Sheryl Sandberg, Katie Couric, the German government and Buzzfeed.

"So this has been my backyard for the last seven years," President Obama said in a video on his Facebook page.

The president took the opportunity to talk about climate change, something he's been talking about a lot lately.

"If all of America is joining around this critical project, then we can have confidence that we're doing right by future generations," the president argued.

That's because the Paris climate conference to shape an international deal to cut emissions is right around the corner. (Video via CNN)

But, on his new personal Facebook, the president made his case personally, bringing up the elusive White House fox, as well as his daughters.

"I want to make sure that the beauty of this particular national park, but also national parks across the country and our planet are going to be around for Malia, Sasha their kids, their grandkids, for generations to come," the president said.