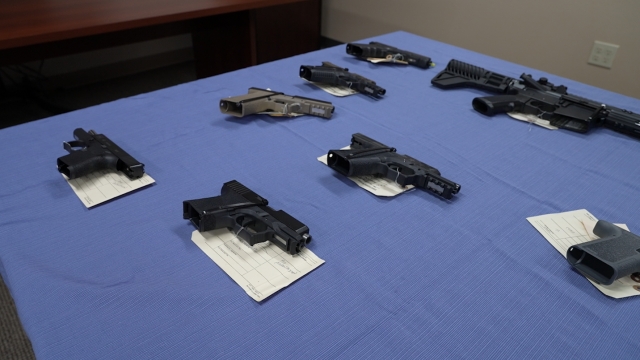 Ghost guns are as deadly as any other weapon and practically invisible to the system. These privately made firearms have no serial number, which means they can't be traced.

They're built using a 3D printer, or using an 80% building kit that includes most of the parts needed to make a firearm.

Kits can be bought online with "no" background check, but new rules are now triggering change.

"A felon, a terrorist, a domestic abuser can go from a gun kit to a gun in as little as 30 minutes," President Joe Biden said.

The new rule qualifies kits as "firearms" and will now require manufacturers of kits to be licensed and include serial numbers.

Under the new rules, commercial sellers of kits must be federally licensed and run background checks prior to sales.

The goal is to crack down on ghost guns, which leaders say are fueling the gun violence epidemic.

In 2019, fire from a ghost gun struck Mia Tretta in the stomach and claimed two lives at a high school in Clarita, California.

"We heard a loud pop. It was a gunshot followed by six more," she said. "Dominick had died and so had another classmate — Gracie Anne Muehlberger, a15-year-old girl with infectious laugh."

In 2021, approximately 20,000 suspected ghost guns were recovered and reported to ATF. That's a ten-fold increase from 2016.

The new rules target manufactures of ghost gun kits like Jordan Vinroe – a gun enthusiast and the owner of JSD Supply.

He says he's experienced exponential growth over the last few years as more people seek out gun making as a hobby.

"Any kind of change, whether it has anything directly to do with home-built firearms or just the industry in general. So it'll affect us," he continued.

As of now, it appears that the 3D industry may not be impacted, but a lawsuit by Second Amendment advocates is expected soon.