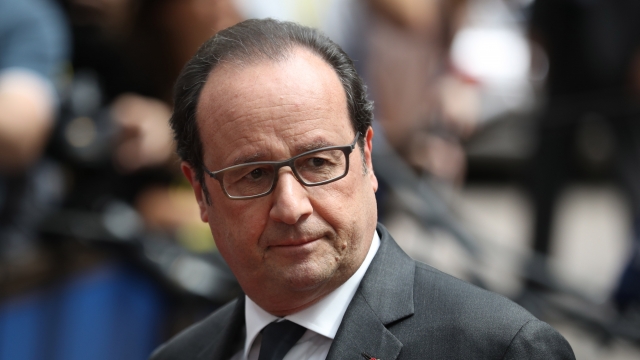 "I am aware of the risks of taking a step that would not bring people together," he said in a televised address Thursday.

Hollande is the first French president in nearly 60 years to not run for a second term. But his decision isn't all that surprising given the current climate in France and Europe.

For starters, Hollande has low single-digit approval ratings. And recent polls show he likely wouldn't make it past the first round of the presidential election in the spring.

SEE MORE: One Year After The Paris Attacks, France's State Of Emergency Remains

There have been several large-scale terrorist attacks in France during Hollande's tenure, including the Charlie Hebdo attack in January 2015, the November 2015 Paris attacks and the 2016 Bastille Day attack in July.

France's unemployment rate has been over 10 percent for most of Hollande's time in office.

And far-right nationalism has gained traction in France, as it has in other parts of Europe, like the U.K. and Germany.

France will likely move to the right when choosing the next president, but the question is just how far right?

SEE MORE: France Is Shutting Down The 'Jungle' Migrant Camp Once And For All

The presidential election will take place in April and May 2017.