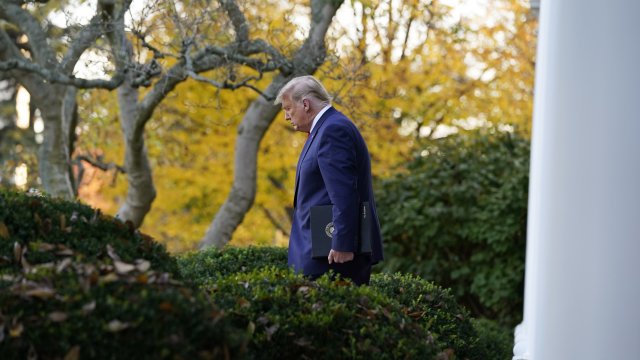 SMS
President Gives First COVID Updates Since Before Election
By Newsy Staff
By Newsy Staff
November 13, 2020
The briefing focused more on the administration's successes than on its plan to curb skyrocketing cases.
SHOW TRANSCRIPT

Since the election, over 10,000 Americans have died from the coronavirus. More than 10 million have been infected.

Before Friday, neither the president nor his aides had addressed the crisis publicly since before Nov. 3, and they still haven't announced how they plan to curb the skyrocketing cases.

Friday's briefing was more focused on successes. The president touted how quickly his administration developed a vaccine, reopened schools and boosted the stock market.

When discussing future lockdowns, he suggested he may still win a second term in office.

The president also said three vaccines are in final stages of trials and will be "ready to go" in a "matter of weeks", and that they'll be distributed to front-line workers, the elderly and at-risk Americans immediately.

But Dr. Anthony Fauci said we won't have a vaccine widely available until April or May.