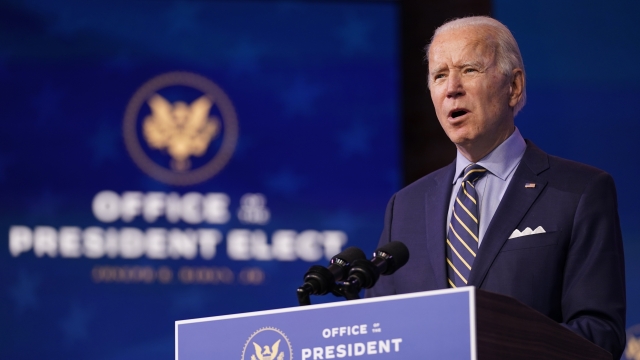 SMS
President-Elect Biden Says Vaccine Distribution Is Far Behind
By Newsy Staff
By Newsy Staff
December 30, 2020
He's wants to come up with a more aggressive vaccine distribution plan than his current one, which is 100 million shots in 100 days.
SHOW TRANSCRIPT

President-elect Joe Biden is warning Americans the pandemic will get worse before it gets better.

He's asked his COVID response team to come up with a more aggressive vaccine distribution plan than his current one, which is 100 million shots in Americans' arms in the first 100 days.

Biden criticized the Trump administration's vaccine distribution efforts on Tuesday saying, at this pace, it will take "years...not months" to vaccinate Americans.

"The Trump administration's plan to distribute vaccines is falling behind, far behind. We're grateful to the companies, the doctors, the scientists, the researchers, the clinical trial participants and Operation Warp Speed for developing the vaccines quickly. But as I long-feared and warned, the effort to distribute and administer the vaccine is not progressing as it should."

Biden said his administration will use the Defense Production Act to speed up production of materials for COVID-19 vaccines.