President Duterte's Discontent With US Could Pose Problems ... For Him 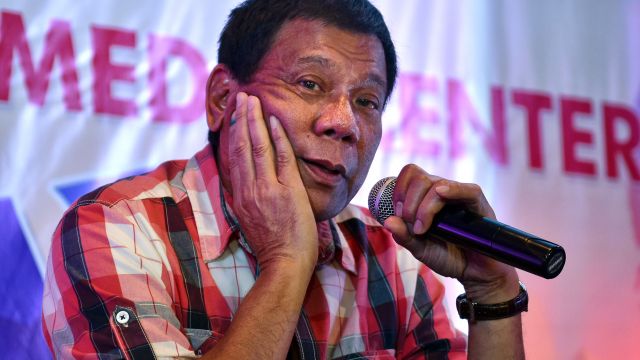 SMS
President Duterte's Discontent With US Could Pose Problems ... For Him
By Matt Picht
By Matt Picht
September 13, 2016
The U.S. will send the Philippines $120 million in military aid this year — but the country's president wants to kick out U.S. special forces.
SHOW TRANSCRIPT

The Philippines and the U.S. are supposed to be close military allies. So it's a bit weird the country's new president, Rodrigo Duterte, wants to kick U.S. special forces out of his country.

Duterte blamed the U.S. for the current unrest on Mindanao island, where an Islamist insurgency is based, saying, "For as long as we stay with America, we will never have peace in that land." He also wants to reorient the country's U.S.-centric military policy.

That'd be a tough feat for Duterte — the U.S. is slated to give the Philippines more than $120 million in military aid this year. And earlier this year, the two nations finalized an agreement to station U.S. troops at five different bases around the Philippines.

The military alliance is supposed to be a bastion against China's influence in the region, particularly its moves in the South China Sea. But Duterte's also signaled he might welcome closer ties with China.

The Philippine president hasn't been shy about bashing his country's ally; he referred to President Obama as a "son of a bitch" while warning him not to interfere with the country's domestic policy.

For now, the Philippine military says it's still committed to maintaining its alliance with the U.S.; one general said Duterte was simply expressing his concern that U.S. servicemen could be targeted by militants.