President Calls For End To 'Suck-it-up' Culture In Sports 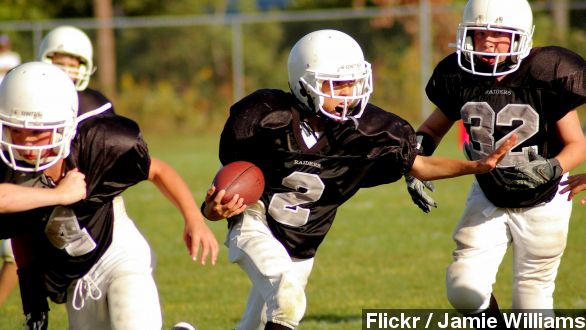 By Jamal Andress
May 29, 2014
In a White House Summit, President Obama has asked parents, coaches and players to be more aware of the dangers that come along with youth sports.
SHOW TRANSCRIPT

President Obama has launched a full attack on what may be the most popular phrase in sports history.

"We need more athletes to understand how important it is to do what we can to prevent injuries and to admit them when they do happen. We have to change a culture that says you suck it up." (Via MSNBC)

During the White House's first ever Healthy Kids & Safe Sports Concussion Summit, President Obama asked parents, coaches and players to be more aware of the dangers that come along with youth sports.

"We want our kids participating in sports. ... As parents though we want to keep them safe and that means we have to have better information." (Via KOLD)

Concussions in sports has been an issue that seems to get worse at every turn, with no one really sure just how bad it is and how many people it affects.

Back in August, the NFL settled a long-standing lawsuit with former NFL players for $765 million over the NFL's role in ex-players brain injuries. A judge later struck down that agreement, saying it didn't go far enough in covering those affected. (Via CNN, The Washington Times)

And it seems the NFL has been writing checks ever since.

In March of 2014 the NFL gave $45 million to "support youth football and protect kids" and this week the NFL pledged $25 million to try and get more health trainers at high school games. (Via ESPN)

"Should my kid play football? What do you say?"

"Well, that's a personal decision but we want them to have the right information when they make those decisions." (Via CBS)

According to ESPN, Pop Warner, the largest youth football program in America, has seen a 9 percent drop in participation since 2010.

Despite the decline, the White House says more than a quarter million young people made emergency room visits for concussions over the past year.

The summit, aimed at raising awareness, has also been a great fundraiser for the cause. The NCAA, Department of Defense, NFL and others have given a combined $85 million toward studying and preventing concussions in youth sports. (Via Flickr / xanteen)