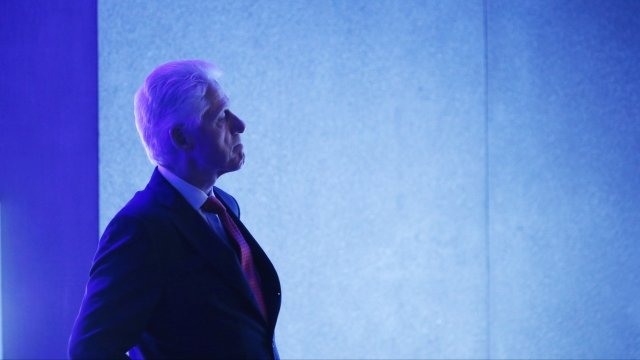 SMS
Clinton Says He Left Presidency $16M In Debt — That's Hard To Back Up
By James Packard
By James Packard
June 7, 2018
The Clintons have talked before about being in debt when they left the White House, but this figure doesn't appear to be accurate.
SHOW TRANSCRIPT

A recent interview with former President Bill Clinton garnered him some heat for what he said about the Monica Lewinsky scandal, but there's a nugget in there not a lot of people are talking about, and it's something we should fact check.

"Nobody believes that I got out of that for free," the former president said. "I left the White House $16 million in debt."

That's doesn't appear to be accurate. The Clintons have talked before about leaving the White House in the red.

"We came out of the White House not only dead broke but in debt," Hillary Clinton said in a 2014 interview.

But the former president's numbers are hard to back up. According to Hillary Clinton's 2001 Senate financial disclosure form, the couple and former staff members had a minimum of $1.75 million in legal debt and a maximum of $6.5 million. Mortgages or loans from relatives might not have been on those forms, but the Clintons' debt was cushioned by the millions they got in public donations to pay off their legal fees.

And their debt was gone by 2004, according to Hillary Clinton's financial disclosure forms from that year.

Regardless of how much debt they were in, the couple clearly had huge earning potential. So while the former president might say he and his wife were deep in debt when he left office, it's not as if they were hopeless.