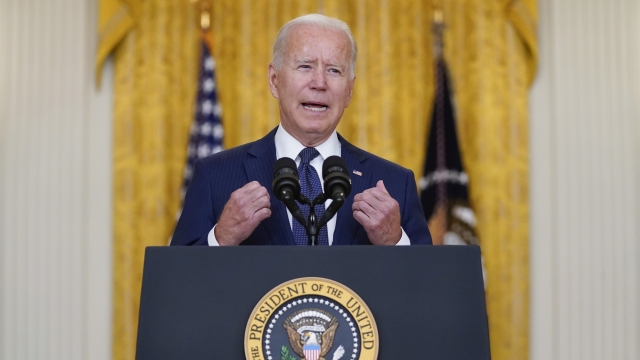 SMS
President Biden: U.S. To Continue Afghanistan Evacuations
By Kamil Zawadzki
By Kamil Zawadzki
August 26, 2021
As many as a thousand Americans are still believed to be trying to find a way out of the country.
SHOW TRANSCRIPT

President Biden says the U.S. won't be deterred by terrorists and will continue the evacuation at Kabul's airport.

He also says the U.S. will keep working to find and get Americans out of Afghanistan even after troops leave, which is still expected to happen Tuesday.

As many as a thousand Americans are still believed to be trying to find a way out of the country.

The president's comments come after bombings near the airport left dozens dead – including at least 12 U.S. service members and 60 Afghans.

U.S. officials believe the attacks were carried out by gunmen and suicide bombers with the Islamic State Group. President Biden vowed to get justice for the lives lost.

"To those who carried out this the attack, as well as anyone that wishes America harm, know this, we will not forgive. We will not forget. We will hunt you down and make pay," he said.

He wants thorough briefings from the Biden administration – and for Congress to pass legislation to block the withdrawal of troops until every American is out.