President Biden To Tour Tornado Damage In Kentucky On Wednesday 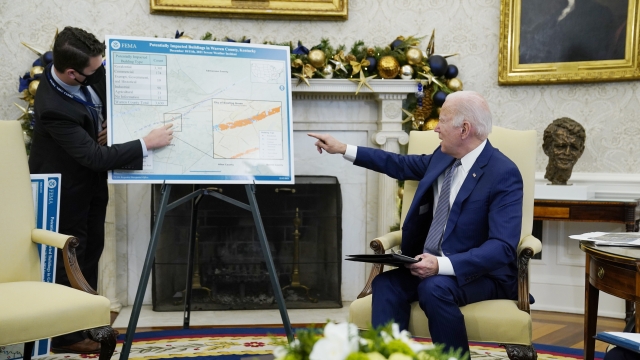 SMS
President Biden To Tour Tornado Damage In Kentucky On Wednesday
By Associated Press
By Associated Press
December 14, 2021
White House press secretary Jen Psaki said the president is not expected to give a speech. Instead he will be focused on meeting with local officials.

President Joe Biden said Monday that he will travel to Kentucky on Wednesday to view damage from last week's devastating tornadoes that killed at least 64 people and displaced thousands more.

The president announced the upcoming trip following a briefing with homeland security and disaster response officials in the Oval Office to discuss what more the federal government can do to support those affected by the natural disaster. The White House said he would visit Ft. Campbell, Kentucky for a briefing on the response operations, and then to hard-hit Mayfield and Dawson Springs to survey the damage.

President Biden said he was developing the itinerary in consultation with local officials to ensure that his presence doesn't distract from the ongoing emergency response.

White House press secretary Jen Psaki said Monday that the president is not expected to give a speech when he visits Kentucky, but will rather be focused on meeting with local officials and "trying to be a source of comfort to people who have gone through a devastating couple of days in their communities."

"That visit is really about him receiving an update of the work that's happening on the ground, hearing directly from leaders on what they need more from the federal government, if anything, and he's going to be very responsive to that," she said.

President Biden, who has already signed emergency declarations for Kentucky, said he stands ready to do the same for Illinois. He added that he has ordered his administration to make every resource available to local and state officials in Kentucky and the other states impacted by the storms.

The president said his message to governors was that the federal government would help them get "Whatever they need, when they need it."

President Biden said he was worried, beyond the lives lost, about the emotional toll the disaster is putting on all those impacted.

"I worry quite frankly about the mental health of these people," he said. He said his administration was working to help people with "peace of mind" so that that can "actually put their head on a pillow, lie down and be able to know their kids are going to be okay."