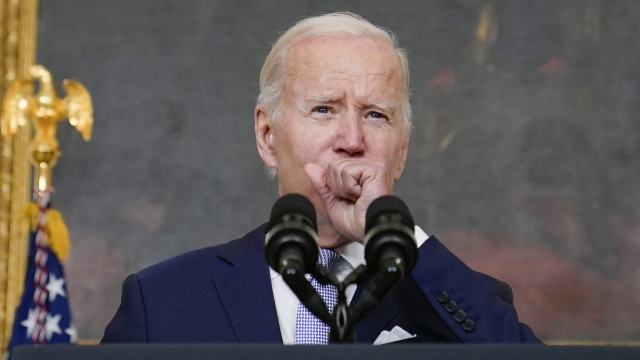 President Joe Biden tested positive for COVID-19 for the second day in a row after the White House had announced he was recovering from the virus earlier last week.

"Hey folks, Joe Biden here. Tested positive for COVID. Going to be working from home the next couple of days. Everything's good, feeling fine but Commander and I got a little work to do," President Biden said on a social post Saturday.

During his initial isolation period, the president's physician prescribed Paxlovid, an anti-viral medication that speeds up the recovery process.

President Biden tested negative earlier last week and returned to work on Tuesday; however, he ended up testing positive this Saturday, and has started another phase of isolation at the White House.

As the president's doctor pointed out in a statement over the weekend, there's a slight chance of testing positive after taking Paxlovid during a COVID infection. Newsy spoke with an expert who explained how this works.

"The accumulated data would indicate about 20 percent of people, one out of five, may have a mild relapse after they stop their Paxlovid. The Paxlovid puts the virus to sleep. It prevents the virus from multiplying. and after you stop the Paxlovid. some of the virus may still be there and wakes up a little bit. but by that time, your body is ready to overcome it, so this is usually brief," said Dr. William Schaffner, an infectious disease specialist.

The president is feeling well, according to a note from his doctor. But his positive test results have changed his schedule.

Over the weekend, President Biden had initially planned an unscheduled stop at the U.S. Capitol to greet protesters calling for the passage of legislation that would benefit veterans exposed to toxic burn pits.

Additionally, President Biden will no longer travel to his home in Delaware, and the White House has also canceled a planned trip to Michigan to promote the CHIPS Act.

President Biden is expected to isolate until he gets a negative COVID result.